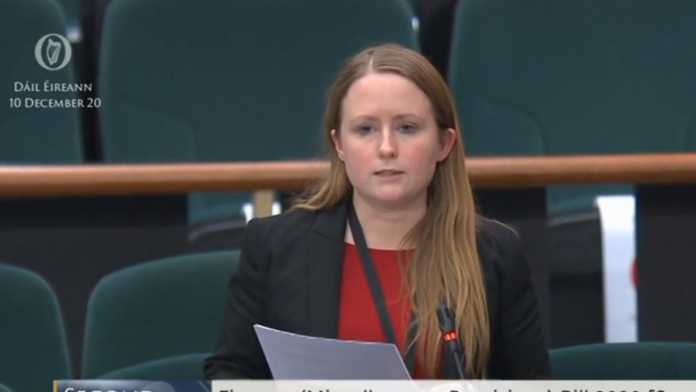 Galway TD Mairead Farrell has said that the Freedom of Information system in Ireland is seriously lacking and abused by the deletion of records.

The Sinn Féin was speaking in the Daíl this week in light of the ongoing political scandal surrounding Katherine Zappone’s aborted appointment as a UN special envoy.

Deputy Farrell introduced a motion in Daíl on Thursday calling for all government departments to ensure that Ministers do not destroy records that should be preserved, and educate the Ministers themselves about what needs to be retained.

It also calls for all public bodies not currently under the remit of the Freedom of Information legislation to be brought into the fold, and for a strengthening of the Information Commissioner’s Office powers to investigate complaints.

This comes after the government has been consumed in recent days with the process behind the Zappone’s planned appointment to the UN envoy role.

Minister for Foreign Affairs Simon Coveney has been accused of cronyism for the entire affair, with people saying that the job was cooked up for a party colleague.

But much of the disaster has surrounded public explanations of the scandal, with Coveney telling the Dáil Committee that he deleted texts between himself and Katherine Zappone surrounding the position.

Tánaiste Leo Varadkar would later release texts which also seemed to contradict Minster Coveney’s claim that she did not lobby for the position.

Speaking in the Dáil, Máiread Farrell said “The reality is that in this State for most of its history there have been very significant concerns as to transparency and access to records and data.”

“Freedom of information has been essential for journalists, political researchers, concerned citizens, NGOs, historians and victims of State abuse.”

“It has been a means to get access to information on politicians’ expenses and to gain access to reports on scandals in our nursing homes, hospitals and industrial schools. It has played very significant roles in sagas that have been detrimental to this State.”

“Many transparency campaigners and journalists have been saying for a very long time that they have very significant concerns as to the ability of the FOI Act at this time.”

According to the Farrell, a survey she conducted last year found that 80% of people in Ireland felt that the FOI system performs poorly, and a whopping 86% felt that it had declined in quality in recent years.

She went on to say that was informed in June that the system is “robust and functioning well”, but called those “famous last words” in light of what has been seen in recent days.

“Those events really show the attitude towards the FOI regime and the fact that it needs to be strengthened. We know that deleting official correspondence is a clear offence under the Act, but this seems to be disregarded again.”

“Public bodies were claiming that correspondence did not exist only to show later that it did. This is nothing new, however. Anyone who has been using FOI can tell you that this happens regularly.”

Minister for Public Expenditure and Reform Michael McGrath moved to amend the motion to be remove all of the points initially put forth, and replace it with language broadly complimentary of the current operation of the FOI regime, and referring to a planned review of the Freedom of Information Act 2014 announced this year.

This motion and proposed amendment is due to be taken up by the Dáil again today.

Deputy Farrell and Deputy Sorcha Clarke are also planning to bring forward an FOI (amendment) bill to address the issues they have with the current system.