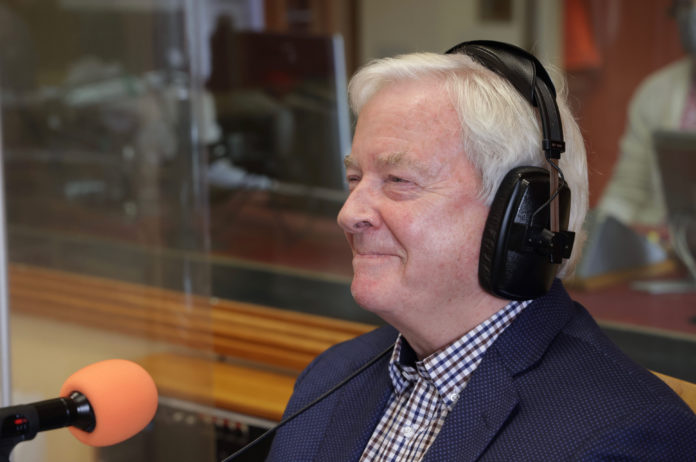 Well-known Galway broadcaster, musician and songwriter Seán Ó hÉanaigh has retired from his work with RTÉ Raidió na Gaeltachta this week, as he celebrates his 65th birthday.

Seán Ó hÉanaigh worked at RnaG for 28 years and is particularly associated with music at the national Gaeltacht station.

Born in Boston in the United States, Seán and his family returned to Ireland to live in Roisín na Mainiach in Carna, Connemara when he was ten years old.

Seán says that he vividly remembers from a young age listening to the pirate radio station Saor Raidió Chonamara, which preceded RnaG, and he has been completely taken with radio since then.

“Since I was in national school, when I first heard Saor Raidió Chonamara, I thought that the best job a person could have would be working in Raidió na Gaeltachta – broadcasting to a community in their own language,” he said on Iris Aniar on RTÉ Raidió na Gaeltachta today.

He spent years in the Armed Forces before working in PR for Bord na Gaeilge, and in 1993, Joe Brennan, Head of Programmes at RnaG at the time, gave him an offer her couldn’t refuse – to put together a summer music series.

Seán took three months’ leave from his job with Bord na Gaeilge and he has been with RnaG ever since.

He has worked on many series over the years, but is most associated with music programmes and music content at the station.

A musician and songwriter himself, Seán comes from a musical family which included his uncle, legendary sean-nós singer Joe Heaney.

But he didn’t go down the traditional route, and had hits with popular songs such as Conamara, which many young people now learn on their summer courses in Irish college, and Ag Éisteacht leis an Raidió, Páidín, agus Na Laetha a bhí.

Seán says that the Réalta songwriting competition, which ran from 1995 until 2000, was one of the highlights of his career with RTÉ RnaG.

It was intended to bolster the Irish-language songwriting industry, and that it did, producing such great hits as An Dreoilín and An Ronnach by Seán Monaghan, Na Laethanta a Bhí by Feargal Ó Béarra and Ag an gCóisir by John Spillane and Louis de Paor.

Seán spent 27 years presenting the Scottish-Irish programme Sruth na Maoile with his co-presenter Mairi Anna Nic Ualraig. The programme was a co-production with BBC Radio nan Gàideal in Scotland, and gave trad and folk artists working in both countries a platform on the national airwaves.

The series ended this year after a record-breaking run, making it the longest running Celtic co-production in the world.

The programme won the award for Best Music Radio Programme at the Celtic Media Festival for their gala concert to celebrate 25 years on air, broadcast live from Glór in Ennis in October 2019.

Seán was appointed head of programmes in 2000 and he was central to the night-time music service Anocht fm which came on air in 2005 when RTÉ Raidió na Gaeltachta first allowed English-language lyrics on the station after 9pm, and he also managed many of the big annual music broadcasts of the station such as the Willie Clancy Summer School and Fleadh Cheoil na hÉireann.

“Raidió na Gaeltachta offered me many, many opportunities over the last 28 years.  I worked with some great people all across the service and learned a lot from them and I’m very grateful for that.”

“The years have flown by, and I have greatly enjoyed my time working for this fantastic radio service.”

Head of Service, Ceannaire Gearóid Mac Donncha, said that Seán had been a fantastic ambassador for RTÉ Raidió na Gaeltachta over the years, with a wonderful way with people, and was a warm and understanding colleague who had given great service.

He said that although Seán didn’t seek praise, he had earned it, and wished him well in the next chapter of his life.