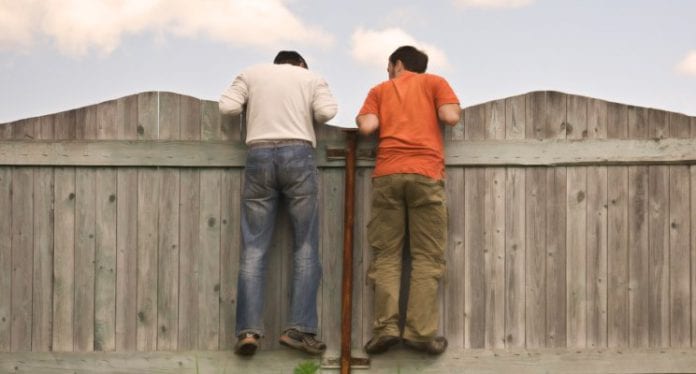 How to deal with disputes with your neighbours

Disputes with neighbours are always more difficult because they are so close to you. You see them every day. You say hello . They never go away. So if your neighbour is doing something which is seriously disruptive to your peace of mind , you are in a bind. If you say nothing , they will continue , if you decide to go “legal” you know that things will never be the same again with your neighbour.

So you try the middle way , you talk to them about the problem as you see it. Often this is the best way. A reasonable neighbour will try to accommodate the person living next to them.
Unfortunately some neighbours are not reasonable.

Q: My neighbour has started to build a large single storey extension right next to our shared boundary wall. This happened while I was on summer holidays. It has a pitched roof and is about 5 metres tall in total. It is reducing the light on my garden and into our kitchen. What can I do to stop him?

A: You need to talk to him immediately , tell him of your concerns. Ask to see the plans.

Q: I talked to him last night , he said that there was little or no interference with my light , that I could build an extension too and he wouldn’t mind. He showed me his plans and said that he had checked , it is exempt from planning and he has a perfect right to go ahead.

A: He’s probably not being truthful. Many back garden extensions may be exempt , but not a 5 metre high one which interferes with your light. Check with a planning expert , Galway County Council Planning department , or do research online .If the building isn’t exempt , then your neighbour should have obtained planning permission and put up a notice. You can give him a choice , to modify his extension so that it is “legal” and doesn’t interfere with you so much , or you can inform the Enforcement section of the Planning Department . If you inform the Council that you believe an illegal construction is taking place , they will send an inspector to check out the site. Ultimately the Council will , after warning your neighbour by letter, go to the District Court and obtain an order for the building to be taken down .

Q: I have a long line of quite high evergreen trees that are all plated on my side of the boundary. My neighbour is entitled to cut his own side ,but recently has started to cut the tops of the trees . ( I think it improves his view) Can he do that?

A: No he can’t. Most boundaries between neighbours are “party” boundaries ,with an imaginary line bisecting the middle of the wall or fence marking the boundary line. Each side is free to maintain their side of the party boundary so long as it doesn’t interfere with the other parties use of the other side. In this particular case , the boundary is not a party one . You own all of the trees . The neighbour can only cut that part which actually intrudes into his own side. Once he cuts beyond that , he is legally trespassing. If he continues to do that over the years , it is actually a way of laying claim to a part of your garden. So , talk to him initially , then write a letter recording the trespass , and if the response is nil , instruct a solicitor who will write a strong letter to your neighbour , telling him to stop within a short period , or face an appearance in the District court. If you are preparing for this scenario , it is vital to take photographs to have evidence to show in court , and of course to check any maps you have.

PS Have you considered that he may have been forced to cut the tops of the trees in desperation? Are you cutting off some of his light?

Q: I live in a ground floor apartment. The people who rent the apartment above me constantly play loud music on the weekends and often any time they feel like it. We have a two year old child and none of us get enough sleep. I have asked them politely to lower the music level but they have ignored me. What can I do ?

A: Firstly , keep a written record of the attempts you have made to resolve the matter with the tenants . Also keep a “noise diary” that can be used in evidence later. The landlord of that apartment has a duty ( Residential Tenancies Acts) to anyone who may be affected by his tenant’s noisy behaviour. Make the landlord aware that he must enforce the lease to make the tenants quieten down. If he doesn’t do this , you have a right to take the matter to the Residential Tenancies Board , which will put pressure on the landlord to keep on the case. At the same time , you also have the right to take the landlord as well as the tenants to the District Court for failing their obligations under the Environmental Protection Agency (EPA) Act . You do not need a solicitor to do this , the cost is only €15 and your local District Court clerk can advise you.