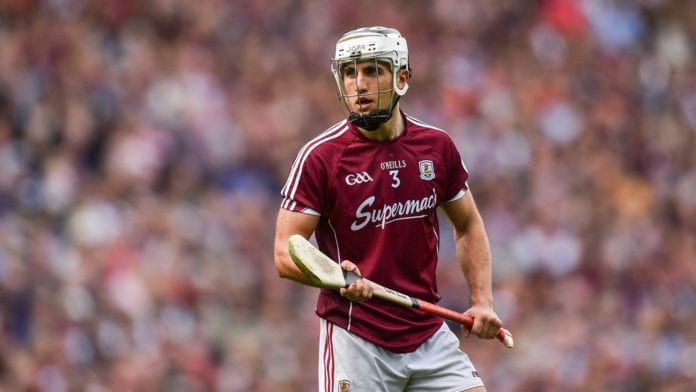 The Monday papers gave Antrim the plaudits if not the result but Galway returned to competitive hurling action on Sunday by edging past their Ulster opponents by three points in Division 1B of the National League in Pearse Stadium.

Antrim guard of honour for all Ireland champions @Galway_GAA pic.twitter.com/jKwF5myT1A

In front of 3,977 supporters, Micheal Donoghue’s charges finally pushed down on the gas in the final quarter as John Hanbury, Eanna Burke, Cathal Mannion, Davy Glennon and Conor Cooney tallied as they outscored their opponents by 0-7 to 0-1.

Galway had the wind in the first half and took an early 0-6 to 0-2 advantage when Cooney split the posts but the effects of their first outing since the All-Ireland final told as Antrim got back to within one by the break.

Captain Neil McManus was the visitors’ top performer getting double digits while Nigel Elliott also contributed a hat-trick and they got themselves 0-10 to 0-9 ahead before Galway debutant Brian Concannon struck a goal from a tight angle.

Galway led 1-9 to 0-11 at half-time but their lead was short lived.  Conor McCann struck the Saffrons’ major five minutes after the restart and they continued pulling away with McManus’ 56th minute free giving Antrim a 1-15 to 1-12 lead.

But they couldn’t manage the insurance score as Galway started emptying the bench.  The Tribesmen did start with only six of last September’s All-Ireland final starting team as they were without the injured David Burke and Joe Canning.

However, with players like Gearoid McInerney, Mannion and Hanbury to bring on, the hosts reeled in the underdogs as Hanbury, Glennon, Mannion and Burke gave Galway a 1-17 to 1-16 lead before Antrim reduced the deficit.

Mannion and Cooney completed the comeback and Galway maintained their unbeaten streak going back to Round Two of the 2017 league against Wexford.

The Tribesmen travel to Laois next week and Donoghue will want a similar result but eyes will turn to a rejuvenated Offaly (18th February) and chief rivals Limerick (4th March) as they key contests to secure promotion back to the top tier.

Declan Rooney in the Irish News wrote – “ANTRIM almost sprung a massive shock against Galway but a spirited display and well-structured performance fell short for the Saffrons against the All-Ireland and League champions in Pearse Stadium.”

bbc.com said – “Antrim gave All-Ireland hurling champions Galway a huge scare before the Tribesmen produced a late rally to win the Division One B league opener.”

And the Irish Times stated – “Galway take their time to shake off Antrim and avoid shock defeat.“