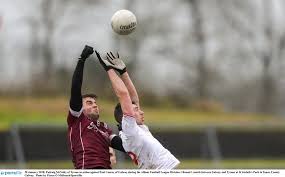 After waiting seven years, Galway exploded back into Division One football on Sunday as a Damien Comer goal in just 16 seconds gave them a lead they never relinquished in Tuam Stadium.

Kevin Walsh’s side were underdogs against last year’s All-Ireland semi-finalists but they rattled the visitors upon the throw-in.  Peter Cooke won possession and instigated the move that resulted in the new captain hitting the net.

They refused to yield as Comer and Shane Walsh added minors to make it 1-2 to 0-0 before Tiernan McCann opened for Tyrone on 15 minutes.

Tough start for Tyrone today, result not overly surprising- Tuam is a tough place to play & Galway could be back at top table this year. No need for panic. #AllianzLeagues

This was an encounter with heated moments and Tyrone suffered a player loss when Darren McCurry saw red after reacting to a late challenge from Eoghan Kerin.

Galway led 1-3 to 0-3 at half-time as Conor McAliskey and Cathal McShane reduced arrears for Tyrone and McAliskey scored again on 38 minutes leaving two between them.

Eamon Brannigan made an impact with two Galway points to provide distance again before Patrick Sweeney and Walsh gave the Tribesmen a 1-7 to 0-4 cushion entering the final 15 minutes.

Division One football requires a willingness to dig deep and Galway provided that for their supporters.  Comer and Walsh found the target to put the result beyond doubt as Tyrone finished their afternoon with 12 players after black cards for Michael McKernan and Harte.

Sean Andy O’Ceallaigh excelled at full back with Walsh and Comer influential in attack as the Tribesmen weathered six minutes of added time to ensure the result.  They join Dublin, Kerry and Mayo on top of Division One ahead of their trip to Letterkenny against Donegal next Sunday (4th February 2pm).

John Fallon for rte.ie wrote – “The hosts led throughout after making a blistering start and while Tyrone staged a good comeback in the second-half, it was the Tribesmen who moved up a gear again in the final quarter to secure a great win.”

And Keith Duggan for the Irish Times stated – “There is always the danger of the newbies to Division One suffering from altitude sickness on their first day out, so the signs were encouraging for Galway on Sunday.”