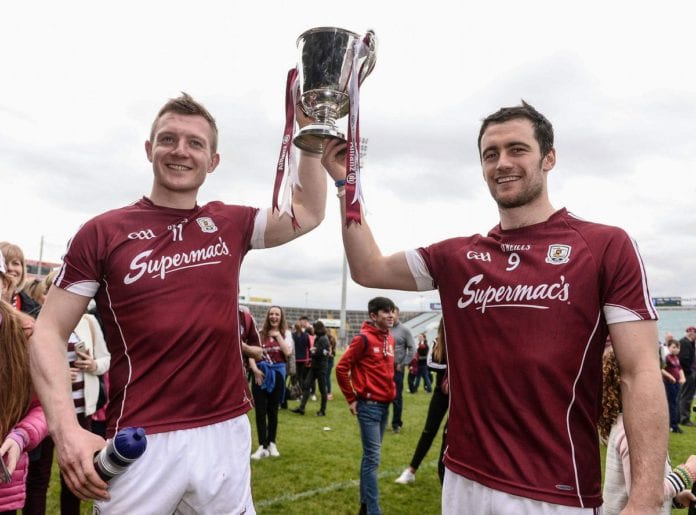 Galway hurling manager Micheal Donoghue has confirmed that captain David Burke and Hurler of the Year Joe Canning should be back within a few weeks after missing their opening Division 1B league match on Sunday.

The All-Ireland champions nearly suffered a shock reversal to 20/1 outsiders Antrim before rallying off seven late points to emerge 1-19 to 1-16 winners.

Antrim guard of honour for all Ireland champions @Galway_GAA pic.twitter.com/jKwF5myT1A

2015 All-Ireland winning minor Brian Concannon struck a crucial first half goal as the maroon and white led 1-9 to 0-11 in Pearse Stadium but Conor McCann’s major for the Saffrons helped the visitors to a three-point advantage entering the final quarter hour.

Donoghue started with just six of the team that began their All-Ireland success over Waterford in September and this was their first outing since having skipped the Walsh Cup in January.

Trailing 1-15 to 1-12 on 56 minutes, scores for John Hanbury, Davy Glennon, Eanna Burke and Cathal Mannion got the Tribesmen over the line ahead of their next assignment against Laois next Saturday (3rd February, Portlaoise 7pm).

Both players were absent for Glaway's three-point win over Antrim on Sunday. https://t.co/DmmMEGalVK

“He’s probably a few weeks away,” said Donoghue to RTE Sport about Burke.  The St. Thomas’ man has a knee injury that caused him to miss the Fenway Classic in Boston and along with Canning, won’t line out against Laois either.

“He’s back doing a small bit,” added Donoghue about Canning.  “But he’s still a good few weeks off.

Donoghue was concerned the game may get away but was pleased how his players finished.