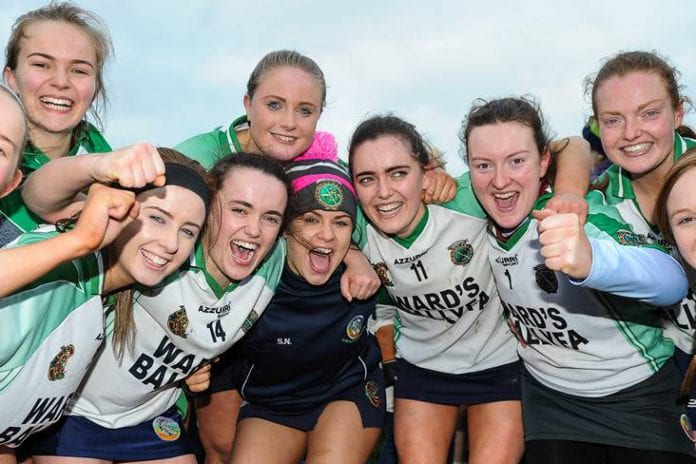 Sarsfields booked a second consecutive trip to Croke Park on Sunday and a rematch with All-Ireland champions Slaughtneil after coming through Tipperary’s Burgess/Duharra 0-10 to 0-9 in Banagher.

Three points from play for Siobhan McGrath and an injury time winner by Rachel Murray put the Galway champions back into the decider on March 4th.

In breezy conditions, Sarsfields struggled following a good start when Niamh McGrath converted two frees.  But they went 18 minutes without scoring as Jenny Grace tapped over five for Burgess/Duharra before Niamh and Siobhan McGrath shared three placed balls to level by half-time.

The contest remained tight as the sides shared two scores each with Siobhan McGrath getting the first from play.  She added two more as Sarsfields led 0-9 to 0-7 but they did flirt with danger including the concession of a 46th minute penalty after Eimear McDonnell was brought down.

Crushing disappointment for Burgess/Duharra as they are edged out in the All Ireland semi-final for the second year in a row. Duharra had their chances but the Sarsfields defense superb in the second half.

Tara Kenny made the save from Grace even though Burgess/Duharra had another couple of golden chances.  Tara Kennedy got their first from play on 59 minutes in a contest dominated by frees before Murray sent over the winner despite Ciardha Maher getting a late Burgess/Duharra point.

“Exactly what we expected,” said Siobhan McGrath after the final whistle when asked about the tight contest in breezy conditions.  “The pitch was as good as you’re going to get at this time of year.  We’re kind of used to it playing down in New Inn.  We knew it was going to be a battle and that’s what it was.”

“It’s not an unusual position for us to be in (going 0-5 to 0-2 behind in the first quarter).  I suppose it’s not a good thing but we’re used to being down at half-time even though we were a bit worried because we had the breeze in the first half.

“I suppose when you have a breeze, you want to be going in with a bit of a lead.  But we said we’d it all to play for.  We knew if we came out all guns blazing, we would be there or thereabouts anyway.”

Listen to the FULL interview below.

Slaughtneil emerged 0-14 to 0-11 winners over Kilkenny’s Thomastown after extra-time to keep their championship defence on track.  And they’ll hope to repeat their 1-10 to 0-11 win in last year’s final when the sides collide again in five weeks’ time.