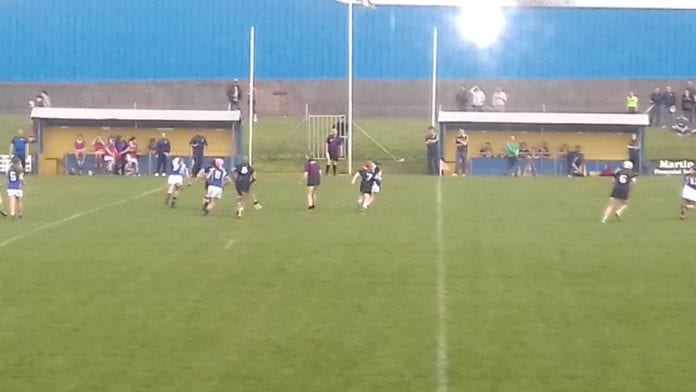 County under 14 B Cup Final – Saturday, 5th May

A strong start secured Ardrahan the County under 14 B Camogie Cup as they built up a six-point lead they never relinquished in St. Brendan’s Park.

After Sharon Dolphin was denied in the opening stages by keeper Maria Cleary, the Ardrahan full forward finished with 2-2.  But it was the raiding wingers, Alisha Quinn and Helena Tarpey, who caused problems for Liam Mellows before they managed to make a breakthrough.

Quinn’s free opened the scoring before Ardrahan went 0-2 to 0-0 ahead on six minutes after Tarpey picked out Dolan.  But their first crucial goal came on nine minutes.

Robyn Healy interchanged with Tarpey before the chance presented itself and Dolan made no mistake.  She added another point on the quarter mark to make it 1-3 to 0-0.

Liam Mellows were struggling to crack their opponents with Ardrahan centre back Ava Connelly standing out.  But they may have had calls for a free when Leana Ni Dhonnacha was taken down while running towards goal.

But the city side did get their score three minutes before the break.  Ciara Dolan’s delivery was taken by Emily Duffy who struck off the ground.

But they needed to add and it was Ardrahan who replied straight away.  Shauna Gardiner set up Quinn for a point on 20 minutes.  And Healy converted a 45 to leave it 1-5 to 1-0 at half-time.

However, Liam Mellows weren’t finished and got back into the contest two minutes after the restart.  Ni Dhonnacha and Duffy made inroads and it looked like Roisin Murray who got the ball over the line leaving them two in arrears.

But four minutes later, Ardrahan wrapped it up.  Dolan was the provider this time supplying Tarpey and she rattled the net.  Tarpey was part of the move down the left that resulted in Dolan’s second goal on 29 minutes.

And Quinn also found the target but her three-pointer was ruled out for a throw.  Liam Mellows tried to give themselves hope before the finish but Ardrahan had done the damage and took the trophy.