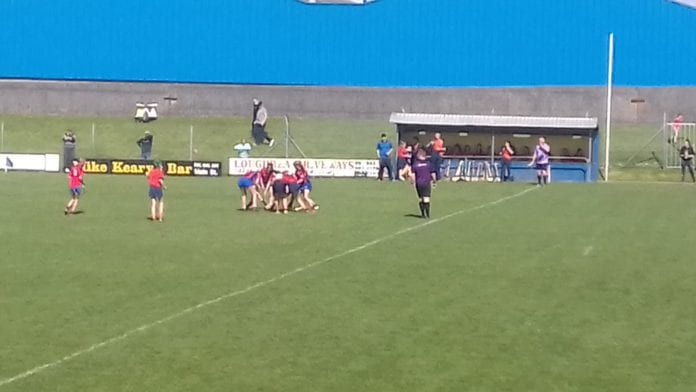 County under 14 A Feile Cup Final – Saturday, 5th May

After trailing for much of the contest, they finally got back on level terms before hitting Abbeyknockmoy for three sucker punches in the closing stages.

With the teams level at 1-2 to 0-5, Catherine Hanley’s on 34 minutes deceived everyone and fell over the line for a first goal to put the south Galway side three ahead.

It rattled Abbeyknockmoy but they were knocked for six two minutes later.  Hanley again with another long ball going into the net.

And in the first minute of added time, Ciara Hickey landed another dangerous ball allowing Caoimhe Hickey knock it to the net.  Davitts were nine-point winners in a game that was much tighter than that.

Abbeyknockmoy recovered from the concession of two early scores to get their noses in front.  Ciara Hickey and Hanley made it 0-2 to 0-0 for Davitts before their opponents responded on five minutes.

Megan Gannon’s ball fell for Leah Moran who applied pressure pushing the Davitts back and she helped the ball over the line.

This was a contest dominated by defences though the midfield battle was equally crucial.  Amy Shiel, Hayley Kenny and Ciara Hickey were catching the eye for Davitts as were Amy Higgins, Grace Murphy and Megan Gannon for Abbeyknockmoy.

But Abbeyknockmoy suffered a blow on eight minutes when keeper Niamh Burke went off injured meaning Anna Murphy had to drop back.  But they did come close to another goal when Megan Gannon came close on 13 minutes.

Rachel Gannon added an Abbeyknockmoy point but Hanley’s free left Davitts’ deficit at 1-1 to 0-3 at half-time.  And substitute Sinead O’Byrne came on to provide Caoimhe Hickey with the equaliser two minutes after the restart.

Hanley added a free to give Davitts the lead but Megan Gannon restored parity on 31 minutes.  But when Hanley’s next placed ball found the net three minutes later, it set up a dominant finish and they successfully retained their title.