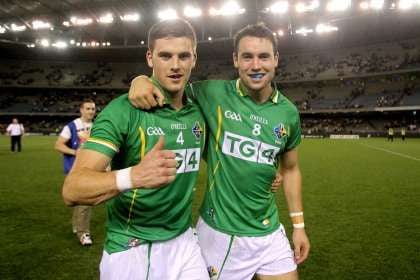 The 32-year-old suffered a cruciate injury in training following the Tribesmen’s National Football League Division Two victory in April after a 12-year career that saw him prove to be one of Galway’s key players.

He made his senior championship debut in 2005 against Mayo in the Connacht Final fresh off joining Meehan on Galway’s successful All-Ireland under 21 team and went on to win that year’s provincial title before adding more in 2008 and 2016.

A huge congrats to Finian Hanley who has announced his retirement from intercounty football after 15 years of serving with the @TribesmenGAA. We at Salthill Knocknacarra GAA Club are all so proud of Finian and look forward to seeing him line out for @skgaa for many years to come! pic.twitter.com/IWjkL9hj3y

Hanley’s leadership was acknowledged by successive Galway managers and he was eventually made captain.  And those qualities were evident at international level also with five International Rules appearances against Australia between 2008 and 2014 while also serving as vice-captain in 2010.

He also enjoyed success with Salthill/Knocknacarra and achieved his greatest moment on St. Patrick’s Day 2006 when they defeated Antrim’s St. Gall’s 0-7 to 0-6 in the All-Ireland Final.  Hanley’s display repelling opposing attacks earned him the man of the match award and he won county titles in 2005 and 2012 (the last team other than Corofin to win the Frank Fox Cup).

With Declan Kyne currently holding the number three jersey and 2017 under 21 Sean Andy O’Ceallaigh expected to challenge, Hanley has opted to make way at county level but will still represent Salthill/Knocknacarra in 2018.

Inter county football has been an integral part of my life for the past 15 years,” stated Hanley in a statement released by the Gaelic Players Association.  “Today I am announcing that I am bringing my inter county career to a close.

“I would like to sincerely thank my family, especially my parents, my wife Pauline and daughter Freya for allowing me the opportunity to play football for Galway.

“I would also like to acknowledge my club, Salthill Knocknacarra. None of the opportunities that I have had would of been possible without my club mates and all involved.

“To all the players, managers, coaches, mentors and delegates I l have played with and for, I am grateful for all their effort and help throughout my career.

“I would like to acknowledge the GAA community for the help and encouragement received during tougher times for me and my family.

“Finally, I would like to thank all the Galway supporters at home and abroad for their valued support throughout the years. I wish Galway football the best going forward.”