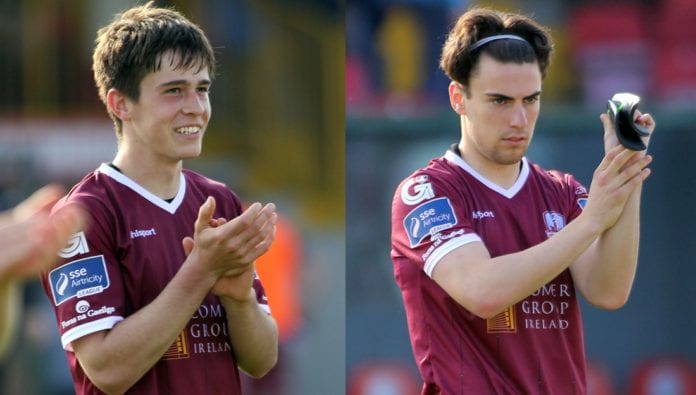 Galway United have announced that Maurice Nugent and Gary Kinneen have become the latest players to sign contracts for the 2018 Airtiricity League First Division season.

Centre back Nugent made one appearance in 2017 having joined the club two years previously and will give manager Shane Keegan options across the back four.

✍️ | Maurice Nugent is the sixth player to sign for Galway United for the 2018 @SSEAirtricityLg season!

The 19-year-old defender re-signs after spending the last three season with the club's under-19 side.https://t.co/hnVgNCRD4R #GUFC pic.twitter.com/u06LYQKxgA

The Ennis native was made under 19 captain by Johnny Glynn for 2016 and scored three goals in 24 games.  Irish under 19 manager Tom Mohan called him up to the international set-up and he also played for the Irish Colleges and Universities team at the World Student Games in Taiwan.

The 19-year old, who previously played with Mervue United, also captained the under 19s to the league final and was brought into the first team for the 2017 EA Sports Cup Quarter-Final victory over Sligo Rovers where he played the entire 120 minutes.

“From what I was able to see of him for the under-19s,” said Keegan on Galway United’s official website, “I think you could argue that he was their most consistent performer last season. He’s very clued-in and down-to-earth, and knows what he wants from his studies and his football.”

Left back Kinneen joined from Salthill Devon’s under 20s in 2015 and also made his mark in Galway United’s under 19s before graduating to the senior set-up.

The 20-year-old made his debut in a pre-season friendly against UCD in 2016 before making four appearances for Keegan’s charges in 2017.  He was also with Nugent competing in the World Student Games in Taiwan.

“Gary has got tremendous attributes along with a really good attitude and I think he will back himself to break into the side next year,” added Keegan.

“What he showed in the latter stages of last season is that he is also very comfortable playing on the left wing and the last time I saw him play for NUIG, his college team, that was where he featured also. He will have an eye on that position too.”