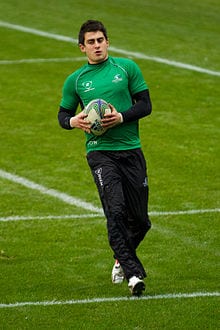 In the first of three interprovincial clashes over the festive period, Keane has made seven changes from the side that comprehensively put away the Brive challenge in the Challenge Cup.

Tiernan O’Halloran returns at full back on the day the IRFU and Connacht rugby announced he’d extended his contract until 2020.  After making his debut in 2009, O’Halloran has made over 130 appearances and the Clifden native has represented Ireland six times including the 2017 summer tour of the United States.

“I am a proud Connacht man and am delighted to be extending my contract with my home province for a further two years,” said O’Halloran to Connacht Rugby’s official website.  “The current squad is an ambitious group and we are determined to bring further success to Connacht.

“I would like to take this opportunity to thank the Connacht supporters who have been loyal to me and the entire team season after season.”

O’Halloran replaces James Leader in the number 15 jersey and is one of three changes in the backs.  Niyi Adeleokun comes in on the wing, Tom Farrell is at centre and Kieran Marmion is handed the scrum half position with Kian Kelleher, Pita Ahki and James Farrell making way.

In the pack, Denis Coulson comes in at loose head in place of the injured Denis Buckley.  Flanker Jarrad Butler returns to the back row after being injured since October’s victory against Munster while captain John Muldoon starts at number eight.  Ciaran Gallagher and James Connolly miss out.

Kieran Keane has announced his starting team to face Ulster in the Sportsground on Saturday. K.O. 7:35pm
➡️ https://t.co/Ovw597sQRT pic.twitter.com/uBXjXI42PM

“The crowd have been massive for us so far this season and the place will be in festive spirit on Saturday,” said Keane as Connacht have installed additional terracing to accommodate the demand.  “That has a huge impact on players. That can create an eight or ten point turn around. Just look how the players responded last week and the night we played Munster. We want to recreate that atmosphere and that performance again on Saturday”

Connacht and Ulster are in opposing conferences but this fixture still carries huge importance to the Westerners who sit just out the Champions Cup qualification position.  Victory will see them leapfrog Cardiff Blues into fourth place in Conference A before the Welsh side face the Dragons in Rodney Parade on Tuesday, 26th December.

Ulster are part of a three-team group clear of their rivals in Conference B but will want to maintain the push on leaders Scarlets.  Les Kiss will hand Darren Cave his 200th Ulster cap in one of seven changes from the side that demolished Harlequins 52-24 in the Champions Cup.

Cave comes in at centre for Stuart McCloskey; Andrew Trimble returns to the left wing replacing Charles Piutau with Jacob Stockdale moving to full back; and Peter Nelson starts at number 10 for Christian Lealifano.