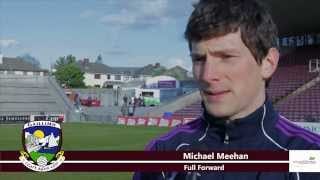 One of Galway’s great players this millennium officially retired from intercounty football last night after Michael Meehan released a statement on twitter.

Having previously left the Galway scene in 2014 following a troublesome ankle injury along with other knocks, the Caltra native returned to Kevin Walsh’s set-up in 2017 and made an appearance in their All-Ireland qualifier victory over Donegal.

From his early days, the Tribesmen knew they had a special talent and Meehan competed in three consecutive Hogan Cups including captaining St. Jarlath’s College, Tuam to glory in 2002.  In that campaign, Meehan struck 2-13 between the semi-final and the final.

2002 was a vintage year for Meehan, whose brothers Tomas and Declan were All-Ireland winners with Galway in 1998 and 2001.  He also picked up a Connacht minor title and scored five points in Galway’s winning All-Ireland under 21 final.

He made his senior intercounty debut in 2003 scoring in Galway’s league victory over Donegal and went on to win Connacht titles that year, 2005 and 2008.  One of his great performances came in a rain soaked Croke Park in 2008 when he kicked 0-10 in Galway’s gallant effort against reigning All-Ireland champions Kerry.

There was another All-Ireland under 21 title in 2005 including his double act with Sean Armstrong where they yielded 6-3 together in a 6-5 to 4-6 win over Down.  But his greatest moment came on St. Patrick’s Day in 2004 when his club Caltra were crowned All-Ireland champions.

Meehan played with four brothers in their 0-13 to 0-12 victory over Kerry’s An Ghaeltacht.  Meehan scored 0-6 and was man of the match while his two siblings (Noel and Declan) helped themselves to another half a dozen scores.

His performances will always be remembered including a stunning goal against Cork in the 2014 championship and he thanked his family, medical staff and teammates among others – “It was the best of times, it was the worst of times, the age of wisdom.”  Meehan is expected to continue lining out for Caltra in the 2018 Galway Senior Football Championship.