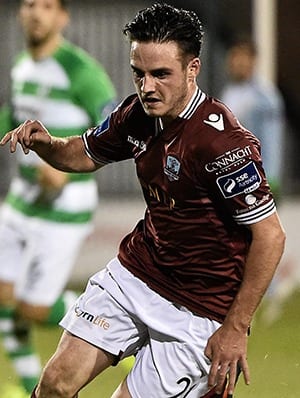 Conway came through the underage ranks after being signed from Arlington AFC by Johnny Glynn and formed a solid centre back pairing with Maurice Nugent on the club’s under 19 side.

The Portarlington native was one of four players brought into the senior squad by Shane Keegan for the start of the 2017 campaign and featured seven times.  His most impressive showing came in Inchicore when he played at full-back in Galway United’s 2-0 win in the FAI Cup in August with Jonah Ayunga and Eoin McCormack on the scoreboard.

“Aaron is a player I have high hopes for,” said Keegan (from Rathdowney) about his fellow Laois man to Galway United’s official website.  “I believe he’s a rough diamond, he only came to the game late-ish. He’s still learning.

“While still being so raw, he has demonstrated that he’s able to come up against established players and he is well able for them.”

Conor Barry and Aaron Conway are the latest additions to our squad for the 2018 @SSEAirtricityLg First Division season!

Barry has also put pen to paper after returning to the club in August 2017.  The Portumna man made six appearances before moving to Athlone Town in 2015 where he scored 10 goals in 42 appearances and will lock horns with his former club in the season’s opener in February.

The 22-year-old can play in midfield or attack and was top scorer with Salthill Devon’s under 19s back in 2013 as well as representing Ireland at schools and university level.  He made his senior league debut for Salthill Devon the same year against Waterford United.

“I’m looking forward to starting back at pre-season in January,” said Barry when speaking to Galway United website.  “I came back in at a difficult time last season and the likes of Gavan Holohan, Ronan Murray and Rory Hale had already cemented their place in the side, it was kind of difficult to break through. I’m hoping to push on next season and get a regular start in the team.”

Conway and Barry join Marc Ludden, Eoin McCormack and Ryan Connolly in committing to the Tribesmen for the 2018 season.