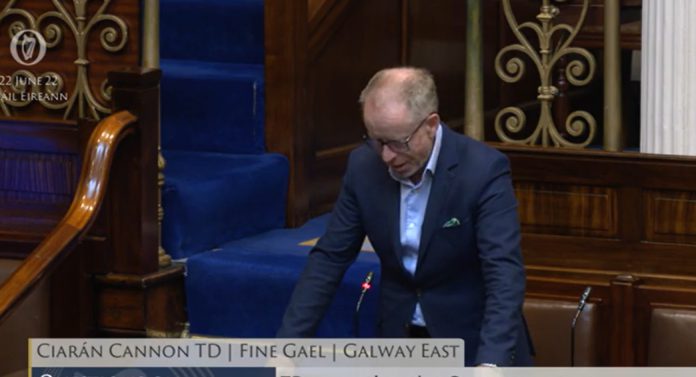 Speaking in the Dáil, Deputy Cannon said that underfunding of Galway County Council is having a significant impact on its ability to hire and retain staff.

Last year there were just 804 people employed by the county council, down from 1,006 council employees in 2008.

Ciaran Cannon compared this to 1,800 people employed by Tipperary County Council last year, 1,240 for Kerry and 1,025 for Mayo.

He said that Galway County Council is facing a funding shortfall of €20 million, with a far smaller budget per capita than other similar counties.

“Right now, the funding shortfall is impacting seriously on its capacity to deliver services, for example in the area of planning,” Ciarán Cannon said.

“Planning enforcement is now virtually non-existent within Galway County Council. Indeed, dealing with the massive additional number of planning applications that have arisen over the last 12 months has been very difficult indeed.”

He said that Galway County Council needs and “immediate injection” of €20 million, which must come before the review of the local property tax system, which aims to equalise council funding, is completed.

Minister of State Frank Feighan said during the debate, that the government intends to move towards a model of all LPT being retained in the council area over 2023/24, up from the current level of 80%.

He also cited €14.5 million in equalisation funding allocated to Galway County Council for 2022 under the current LPT model, and a provisional allocation of €4.44 to cover additional staff costs this year from national pay agreements.

“Each local authority situation is complex and it is important that sufficient time is taken to analyse and assess potential options in that respect. Preliminary census data will also form an important input to that deliberation.”

Deputy Cannon said that the Minister was simply reading out a “totally unacceptable” answer provided by departmental officials.

“Galway County Council needs to be brought into line with other local authorities of similar demographic make-up and similar size.”

“It is not acceptable that a local authority in one part of the country has to cope with doing its work with 800 staff while another similarly sized local authority has 1,800 staff.”

“That inequity has existed for a very long time. It needs to be addressed completely separately from this ongoing local property tax review.”