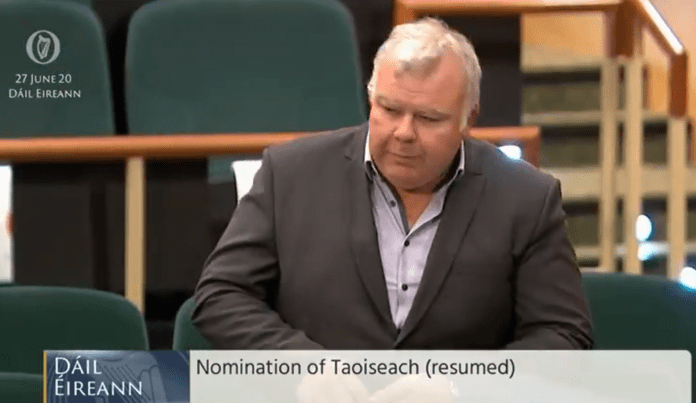 Galway TD Michael Fitzmaurice spoke in opposition to the nomination of Micheál Martin as Taoiseach today as the formation of our new government continues.

Micheál Martin was chosen as the next Taoiseach to lead the FF, FG, and Green Party coalition government today at a meeting of the Dáil at the Convention Centre.

Speaking there this morning, Micheal Fitzmaurice started by thanking outgoing Taoiseach Leo Varadkar for his service in the COVID-19 crisis, saying that “a lot of the bickering went out the window” and peple rallied together.

He wished Micheál Martin luck in the years ahead, but said that he was opposing the Fianna Fáil leader’s nomination as Taoiseach.

This was “not because of you” Fitzmaurice said to Martin, but due to the Programme for Government, which he claimed would destroy “the fabric of rural Ireland” and remain undelivered after many promises.

The Independent TD spoke critically of Green Party leader Eamon Ryan’s comments that people will be able to walk to work .

Fitzmaurice also pointed to the spread of COVID-19 cases in the country, which have been concentrated in urban areas, and said that it’s a “testament to the people of rural Ireland” that there were fewer outbreaks in these areas.

“The road ahead will be bumpy. But we have to look at the people and represent the people that have put their faith in us,” he said, criticising the content of the Programme for Government, and the “imprint” of the Green Party.

Fitzmaurice questioned “how anybody could vote for it that is from a rural area” and said that planning guidelines are making it impossible to build a house in rural areas.

“All I say to you Micheál Martin is, it’s an old saying in rural Ireland, may the road rise to you. But unfortunately the Greens have said there will be no new roads.

Sinn Féin's support has surged by 3 points to 30% in the latest Red C/ Sunday Business Post poll published today, which is the...
Read more
POLITICS

How Twitter could help Donald Trump hold onto power in 2020

As we edge closer and closer to polling day, a nation remains split on who will lead America as President for the next four...
Read more
POLITICS

PBP Galway meeting to look at solutions to the housing crisis

People Before Profit Galway will host an online public meeting this week looking at solutions to the housing crisis and the redevelopment of several...
Read more
Facebook
Twitter
Pinterest
WhatsApp