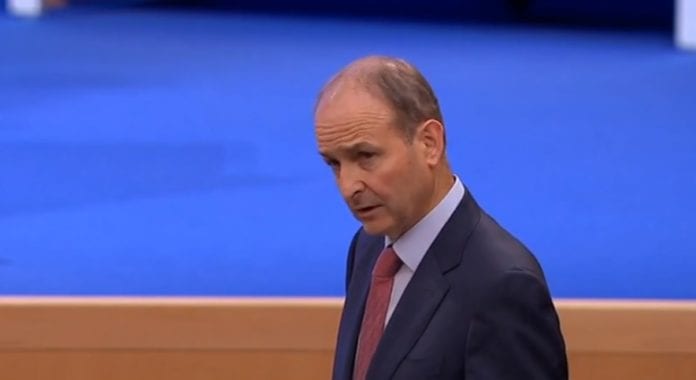 The government has given in to opposition pressure to recall the Dáil early due to public outrage over a large number of people at a golf society dinner in Clifden.

The Dáil is currently in recess, and was not due to return until September 15 from TDs six week summer break.

But the leaders of the coalition, Taoiseach Micheál Martin, Leo Varadkar, and Eamon Ryan, have now agreed to recall the Dáil when schools reopen.

The Taoiseach will make this request to the Ceann Comhairle on Monday, after earlier saying it was not up to him to recall the Dáil.

Labour Leader Alan Kelly took to Twitter to say that it should be recalled on Tuesday, August 25, not after schools reopen.

Mr Kelly said on Friday that he had never seen “such public anger on an issue so quickly”.

The Dáil should return next week, on Tuesday 25th August, not after the schools.

There are too many serious issues to be discussed, and we must restore the confidence of the public.

This is the letter I wrote to the Taoiseach today asking him to bring us back.#recallthedail pic.twitter.com/gKVmzjrYEo

Two senior politicians have already fallen over the Oireachtas Golf Society event, which was attended by over 80 people in Clifden this week.

Agriculture Minister Dara Calleary and Leas-Comhairle of the Seanad Jerry Buttimer have already resigned their posts due to the event, and pressure is growing on EU Commissioner Phil Hogan to do the same.

Commissioner Hogan said in the aftermath of the event that he understood at the time that the organisers and hotel were confident it was compliant with regulations.

However this did little to damp the fires of public outrage, and the Taoiseach said that Hogan should “consider his position” in a statement that stopped short of calling on him to resign.

Gardaí have also confirmed that an investigation is underway to determine if the event broke any COVID-19 regualtions.

“As this is an active investigation An Garda Síochána has no further comment,” a statement  from the force said.