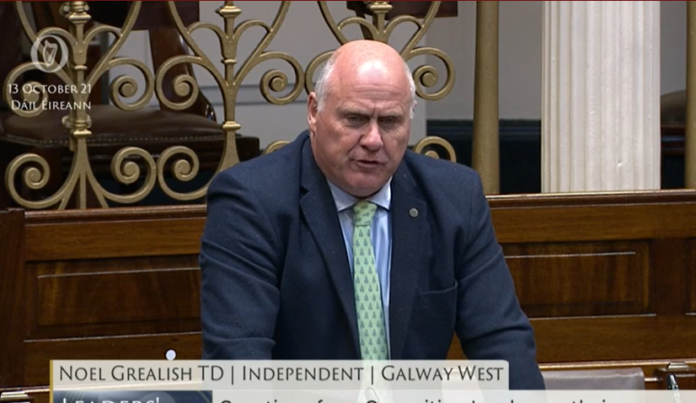 Bail laws need to be strengthened to prevent serial offenders from committing further offences while they’re already before the court a Galway TD has said.

Speaking in the Dáil this week, Galway West TD Noel Grealish said that more than a quarter of a million offences have been committed over the past decade by people who were on bail at the time.

“Of course, these figures only relate to those offenders who were caught and convicted in courts and do not include what may be thousands of more serious offences where nobody was charged or convicted.”

In 2020 alone people on bail for other charges were responsible for one in six crimes for which there was a court conviction, Noel Grealish said, more than 30,000 convictions in total.

This accounts for one in five murders, 25% of people convicted of a firearms or explosive offence, and 16% of robberies, extortion crimes, and hijackings.

“It is clear something must be done about easy access to bail for serial offenders who have no hesitation in leaving court and going out on the street to inflict further trauma, injury or worse on others.”

“It is obvious the rules governing the granting of bail to repeat offenders are not protecting members of the public from suffering further harm at the hands of these people.”

Taoiseach Micheál Martin responded that this is an extremely important issue, one that is key to creating a “genuine sense of security” in people’s homes and communities.

“It is a priority for the Government and the Minister for Justice. We are striving to provide that safety by engaging with communities, reducing crime, tackling recidivism and supporting victims.”

The presiding judge, who decides whether to grant bail to someone accused of a crime, has the authority to refuse it if they believe that it’s necessary to prevent further serious offences, or for other reasons.

The Criminal Justice Act 2017 strengthened bail provisions by allowing Gardaí to call an alleged victim to give evidence at a bail hearing, regarding the likelihood of the accused interfering with witnesses, or posing a danger to victims or their families.

Taoiseach Martin said that the priority of the Minister of Justice right now is tackling penal reform and recidivism, to cut down on the number of people reoffending to begin with.

“We understand certain offenders have relatively high risks of offending while on bail. Again, it is a matter for a trial judge to determine whether bail should be granted by weighing up factors in each case.”

“The Government will take further measures to increase access to addiction treatment, education and employment opportunities. There will be increased use of community-funded organisations.”