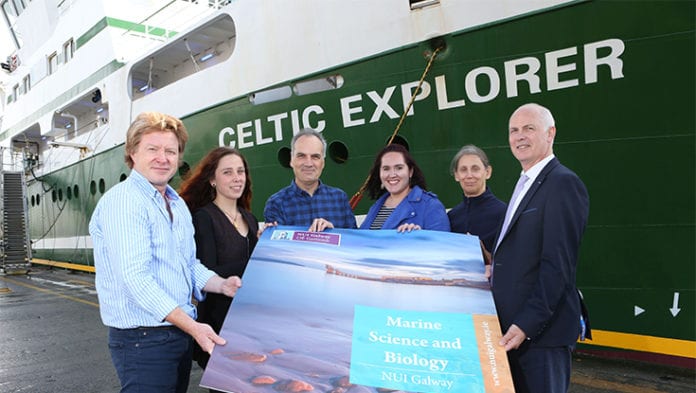 International Marine Biology students will get an in-depth look at life in Galway Bay and beyond as part of a new tailor made programme at NUI Galway.

NUIG’s International Affairs Office and the College of Science have announced a new Marine Science and Biology Study Abroad Programme for students dipping their toes in Galway for a semester, or taking the plunge for a full year’s experience.

J.B. Terrins, International Mobility Manager at NUIG’s International Office, said: “The marine environment is all around us in Ireland, and Galway is internationally renowned for its marine research and teaching.”

“NUI Galway has been hosting visiting university students, most typically from the US, for over 30 years, and this programme recognises an increasing demand for science courses in specialisms for which it is known globally.”

This practical programme focuses on studying ocean life and environments, as well as the fundamental biological underpinnings of marine science.

In doing so students will not only come to better understand how marine life is distributed and evolves, but get a close look at how it’s affected by human activity in Galway Bay and further afield.

It’s been a chaotic summer for marine life in Galway with many unprecedented events taking place including mass whale deaths, and inexplicable encroachments by lion’s mane jellyfish on the west coast.

Lion’s mane jellyfish, native to the Irish Sea but virtually unheard of in the west, have been spotted by the hundreds along the Atlantic coast this summer with 61 sightings in Galway alone.

Marine experts are baffled by this change in habitat, but there’s a possibility that warming ocean temperatures could be behind the migration.

Another, more tragic, example of unexplained activity with marine life has been massive numbers of Cuiver’s Beaked whales that have come ashore dead.

At least 16 were found dead along the west coast in August, with many more in Scotland and Iceland.

It’s believed that all of the whales died around the same time, building on smaller mass deaths that occurred in late 2014 and 2015.

While neither of these phenomenon have been explained yet, it’s clearly an exciting and frequently alarming time to be a Marine Biologist, and Galway is leading the way with marine research in Ireland.

“We are the only university in Ireland to offer an undergraduate degree in Marine Science, and Galway has the highest concentration of marine scientists in Ireland,” said Professor Mark Johnson, Head of the Marine Science programme.

“This includes researchers in NUI Galway’s Ryan Institute, our Marine Research Station in Carna, County Galway, and colleagues in the Marine Institute in Oranmore.”

“The work ranges from studying the science of marine ecosystems to co-operation with industry and state agencies on how to work with the sea.”

Working with the sea is an inextricable part of living along the Atlantic Coast, with strong traditions of fishing, sailing, and oyster harvesting in Galway.

Marine researchers carry on that tradition from old practices into the very bleeding of scientific knowledge, sharing with students from around the world.