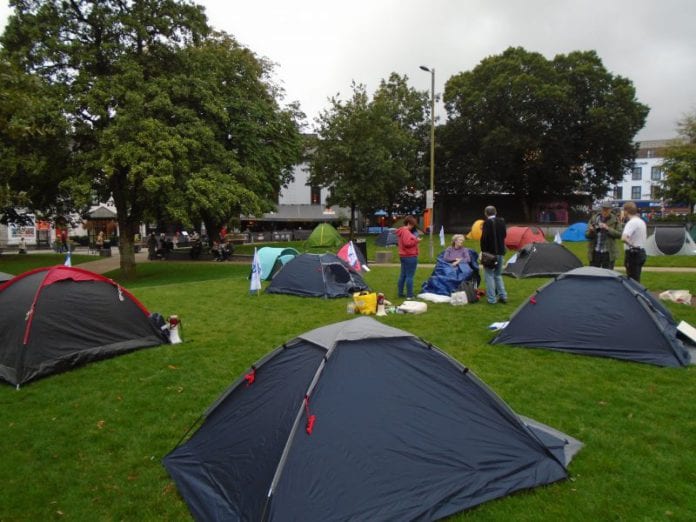 Students from GMIT and NUI Galway have set up shop in Eyre Square this evening for a Crisis Campout to highlight the shortage of student accommodation in the city.

The Students’ Unions from both colleges organised this eye-catching protest working together with One Movement Galway, a coalition of Trade Unions, Students’ Unions, and other civil groups.

Aaron Burke, President of the Students Union at GMIT said the reason they chose to go with tents was, “because by their nature, it’s just a normal shelter, and that’s all students need is somewhere that’s safe and affordable.”

“We’ve nearly lost students this year because of the lack of student accommodation, and it’s not only that, it’s the price.”

Both Students’ Unions have condemned the rise of ‘luxury’ student accommodation with ‘extortionate’ rents that are driving students further and further from Galway city to find affordable accommodation.

Aaron said one of the only things that’s keeping students in college is the number of people around the city who’ve been offering rooms in their homes as ‘digs’.

“I’d like to thank all the local residents around the area for offering up their homes to our students, because without them we wouldn’t have students in college,” Aaron said.

“And it shows in the amount of digs that we advertise on our website that people are willing to open up their homes to help students.”

As well as just calling attention to the problem of a lack of purpose built student accommodation, the organisers of the Crisis Campout plan to petition the city council and other local representatives about the need for more regulation in the property market.

“There’s next to no regulation around AirBnB, which allows a lot of properties lie vacant,” said Megan Reilly, President of the NUIG Students’ Union,

“Which puts further strain on the property market around the city. And there’s the quality of accommodation, things around inspections, so it’s a very broad campaign.”

“There needs to be more social housing built as well, and if there’s more purpose built student accommodation it takes pressure off the private market, which in turn would help more families get accommodation,” she concluded.

Without sufficient student accommodation, Megan said, students are forced to live in hotels or couch surf with friends, essentially living as hidden-homeless.

But some progress has been made on delivering more student accommodation in Galway.

A major development on the site of the Westwood Hotel in Newcastle received approval to go ahead from An Bord Pleanála this week, and local campaigners to save the hotel have said they won’t be appealing the decision.

Labour Party leader Brendan Howlin was down in Eyre Square to hear from Megan and Aaron, as well as President of the Union of Students of Ireland, Síona Cahill.

Stopped by the @NUIGSU and One Galway camp out for housing on Eyre Square highlighting the challenges for students when it comes to student housing in Galway. pic.twitter.com/ubNFx08I77

The Crisis Campout was originally planned to go on overnight, but organisers made the decision finish up at 11pm tonight instead.

Next, many of these same students out tonight will be taking part in the national Raise The Roof protest on October 3 calling for more social housing, an end to a cruel evictions process, and a legal right to housing.

Raise The Roof was launched by the Irish Congress of Trade Unions last week with the backing of the the National Homeless and Housing Coalition, the Union of Students in Ireland, and the National Women’s Council of Ireland.