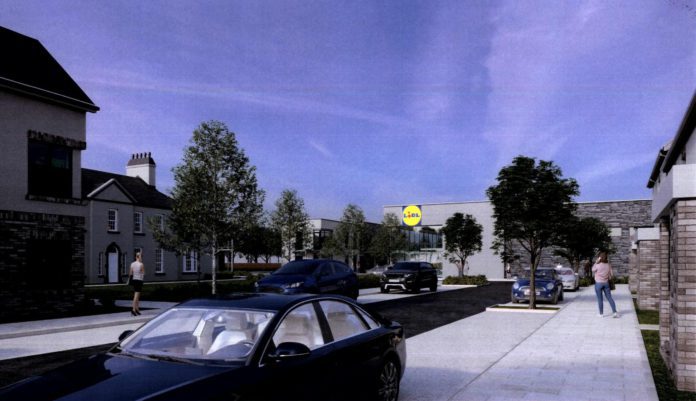 An appeal has been lodged with An Bord Pleanála against the refusal of planning permission for a supermarket and housing estate in Athenry.

Ghost Zapper Ltd, part of the Comer Group is appealing the county council’s rejection of plans for 59 houses and apartments, along with a Lidl supermarket and other commercial units.

The site of the development is to be located at the south-east end of Athenry, next to the Clarin River, and close to the protected structure Athenry House.

The residential element of this proposal would consist of 28 three and four bed houses, and 31 apartments.

The business side of the project would include one building with two commercial units, a separate café building, and a supermarket with 2,662m² of commercial floor space.

The developer also intends to demolish a derelict outbuilding of Athenry House, and refurbish the old country house as a community and heritage centre.

The county council refused planning permission last month, based on concerns about some elements of the design of the estate, flood risk, road safety, lack of parking and heritage issues with demolishing outbuildings at Athenry House.

The appeal report argues that is necessary to demolish the outbuilding and former stables in order to gain access to the site, and rejuvenate Athenry House.

As far as concerns about the design of the estate not matching the character of the area, the appeal argues that the buildings directly around the site are mostly mid-late 20th, with no “significant architectural heritage” value, and that flexibility is needed in accommodating contemporary buildings.

Alterations were also made to the design of apartment blocks 11 & 12 at the southern edge of the site, which were singled out by the council.

The developer disagrees with the council’s conclusions on the flood risk at the site, saying that the design has been chosen to ensure there is no flooding on site, or an increased risk downstream.

Regarding traffic safety concerns about the internal access road, the appeal states that its alignment is “dictated by the existing constraints of the site”, and that clear sightlines will be provided by removing a boundary wall.

Finally the appeal acknowledges that the 214 car parking spaces proposed is less that then 291 spaces required under the county development plan.

However, it argues that this includes an “excessive” requirement of 179 parking spaces for the supermarket, more than is needed.

An Bord Pleanála is due to make a ruling on this appeal by August 31 of this year.