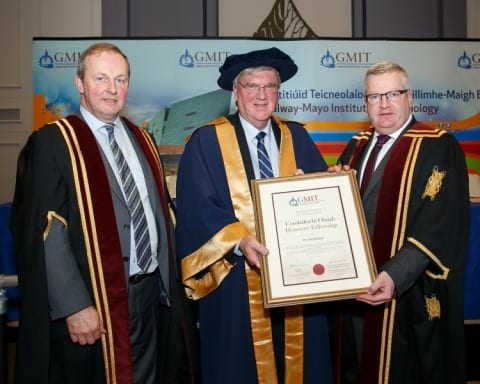 The owner of Supermacs Pat McDonagh has been awarded an honorary fellowship, the highest honour GMIT  can confer.

Described as a businessman, innovator and entrepreneur of great distinction, he followed in his mother’s footsteps and became a primary school teacher, eventually becoming principal at Kilrickle National School in Loughrea.

In 1978 he left teaching to use his entrepreneurial talents and developed what has become the largest restaurant chain in Ireland, Supermacs.

Deirdre Lusby, Head of Department of Management, said that Mr McDonagh has employed and continues to employ many graduates and students of GMIT, across all his businesses.

“Pat is also a strong supporter of charities and of the Arts in Ireland. Supermac’s currently sponsors 114 sports teams, arts organisations and charities throughout the country.

“As a great supporter of all things local, Pat McDonagh has always supported the efforts of GMIT and local Schools, whether it be sponsorship of an event or involvement as a speaker, his dedication to his own local area and what he can do to improve it has become synonymous with him.

“His greatest link to GMIT is through employment of students and graduates, indeed all of his HR team have been through the GMIT BA in Human Resource Management Degree course over the years.

“Pat has been a quiet and effective mentor to many small business owners in the community without seeking any publicity. He has provided many motivational talks to students, and professional organisations over the years,” said Ms Lusby.