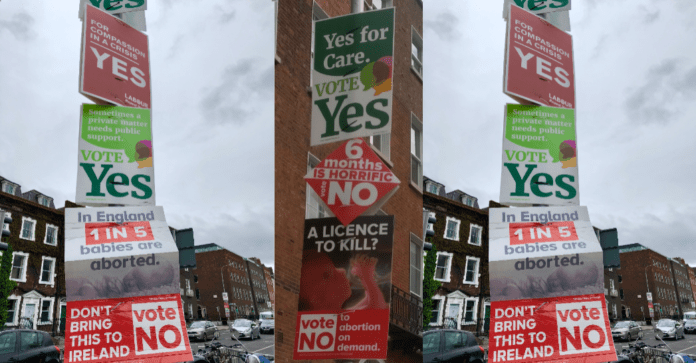 There have been fresh calls for the regulation of election posters – this time from Galway West TD Hildegarde Naughton – who has has said that referendum and election posters should have to comply with minimum standards.

The Fine Gael TD, who campaigned for a Yes vote in the recent referendum, said that some of the posters used in the campaign were upsetting, inappropriate and misleading.

Deputy Naughton said: “While opposing groups engaged in respectful debate throughout the recent campaign for the most part, I was struck by the often disrespectful images and messaging that could be seen on posters around the country.

“I was particularly struck by the posters that were put up or held by demonstrators outside maternity hospitals.

“This was a particularly insensitive move and showed a complete lack of respect for women attending these hospitals who may have been receiving bad news or hearing about issues with their pregnancy.

“The posters were also deeply upsetting to women across the country who have travelled abroad for terminations and their families.

Deputy Naughton said that many people encountered parents on the campaign trail whose children had asked them about the poster and to explain the images on them.

She continued: “It has never been the case in Ireland that we have regulated posters during referendums or elections, but I think the often grotesque nature of the signage used during the recent referendum shows we must have minimum standards.

“We need some consideration of the issue, perhaps on an all-party basis.

“While it would be an unprecedented move to regulate, surely people would be in favour of banning upsetting, unsuitable and disrespectful pictures on posters.

“While I would never call for anything that would restrict democracy and freedom of speech, I feel some consideration should be given to this issue by the Committee on Housing, Planning and Local Government, which covers electoral matters.”