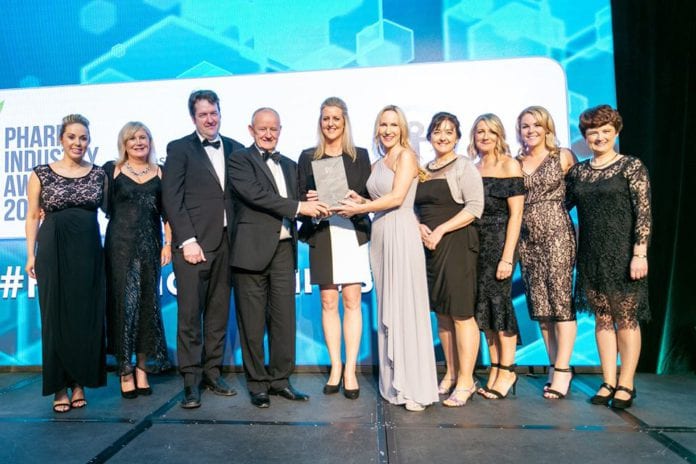 Galway based Channelle Pharma has been named the overall Irish Pharma Industry Company Of The Year, the first ever native company to win this national award.

Chanelle was the only indigenous Irish company shortlisted for the prestigious industry award.

The home grown company headquartered in Loughrea beat out multinationals such as AbbVie, GE Healthcare, MSD, and Perrigo Company.

On the night, Chanelle took homean additional prize, also being named the best Large Pharma Company of the Year.

Michael Burke, Founder and Managing Director of Chanelle said,”I am honoured that Chanelle Pharma has been recognised by our peers with this prestigious award.”

“To be named Pharma Industry Company of the Year is a fantastic achievement which reflects on the dedication and commitment of the staff in Chanelle.

“It is a tribute to the combined efforts of our people that Chanelle is being recognised in Ireland and worldwide for its manufacturing excellence, its innovation and its exporting success.”

“This Award recognises our growth as a company and our contribution to the Irish economy,” Mr Burke said.

Chanelle recently announced a multi-million euro expansion at their Loughrea headquarters that will create 350 jobs in Galway over the next five years.

The €86 million expansion involves building a new manufacturing plant for liquid and paste medicines bound for the U.S market.

When it’s completed Chanelle will employ a total of 850 people.

The Irish Pharma Industry Awards were founded in 2014 to celebrate the most original and innovative individuals and companies that demonstrate excellence in the Irish Pharma sector.

The 2018 gala awards ceremony and banquet was held at the Clayton Hotel in Dublin.

Chanelle is one of Ireland’s leading exporters, trading with over 90 countries around the world.

The pharma company has a heavy focus on innovation and research with 96 new products in the pipeline.

Recently, Tanáiste and Minister for Trade and Foreign Affairs Simon Coveney cut the ribbon on a new €10 million manufacturing facility in Loughrea.