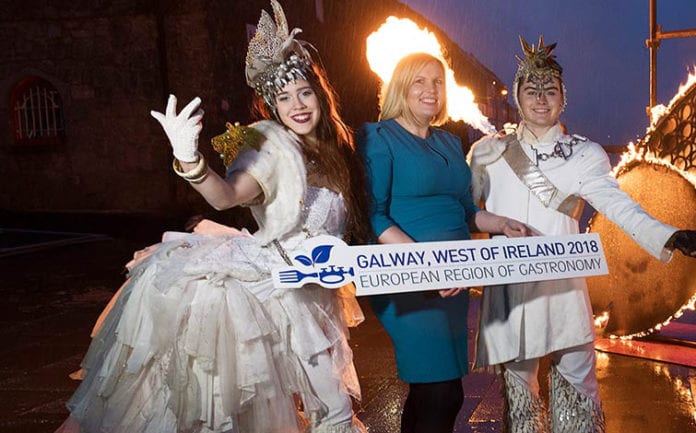 Galway is the place for a tourism experience like no other, and championing the county are four finalists in the running for the 2019 Irish Tourism Industry Awards.

Along the Wild Atlantic Way there were two Galway nominees in the categories for best Large and Small Tourist Experiences.

The European Region of Gastronomy, Galway 2018 has been nominated for best Large Tourist Experience along the Wild Atlantic Way.

While Leenaun’s Killary Adventure Company is offering the best coastal experience of Irish tourism at the local level.

All through this year local businesses, community groups, government bodies have been promoting Galway’s food culture, one that takes in the best offerings of the Atlantic.

Events like Food on the Edge and the International Oyster Festival have helped solidify Galway and the West’s reputation as a food destination as the Region of Gastronomy 2018.

That work has paid off in spades with much international attention, including getting a nod from National Geographic as a place you have to visit in the new year.

For nearly 40 years Killary Adventure Company has been offering a rake of adventure activities for school tours, business groups, and stag and hen do’s.

Mary and Jamie Young were both already experienced sailors and adventurers when they settled in Killary Fjord and started taking people out boating, raft building, climbing, abseiling, and more.

This year marked the opening of a new luxury Killary Lodge for guests taking the full weekend experience.

For anyone who has been through Galway in the summer, the International Arts Festival needs no introduction.

This world famous event draws musicians, artists, and performers from every corner of the world, along with the hundreds of thousands of people who come to see them.

The Arts Festival has been nominated for the Best Festival/Event Experience for its contribution to Irish tourism.

In the Food/Beverages category Galway is dominating the competition, taking two spots on the list with Leenaun’s Misunderstood Heron Food Truck, and Galway Food Tours in the city.

Misunderstood Heron sets up in a beautiful spot overlooking Killary Harbour right in the car park of Killary Adventure Company.

Owners Reinaldo Seco and Kim Young said they were thrilled to see their neighbours made the finalists list as well.

The food truck is a charming local spot with benches and picnic table for visitors to take in the view.

Serving mussels straight from Killary Harbour and Connemara Lamb from a farm just up the road, this isn’t the first time they’ve caught judges eyes lately.

Galway Food Tours are a two hour culinary walking tour of the city taking in the passion and produce that goes in Galway’s cuisine.

During the tour you will get to experience a taste from artisan producers, cheese makers, creative beer projects, and artisan chocolatiers.

They’re made by everyone from traditional family businesses to young entrepreneurs with a bright idea and a passion for food.

Other options include the four hour Connemara Pup Tour with the best of the region’s pubs.

Or the Connemara and Aran Island Food Tour that takes in the best of the Wild Atlantic Way that includes great food taking in the views of the Cliffs of Moher and a flight over to Inis Mór.

Founder Sheena Dignam is a Franco-Irish food and wine lover whose passion led her to launch this unique tour.

The winners of the 2019 Irish Tourism Industry Awards will be announced at a ceremony at the The Clayton Hotel in Dublin next February 1.

The full list of finalists in the running for the awards can be found here.