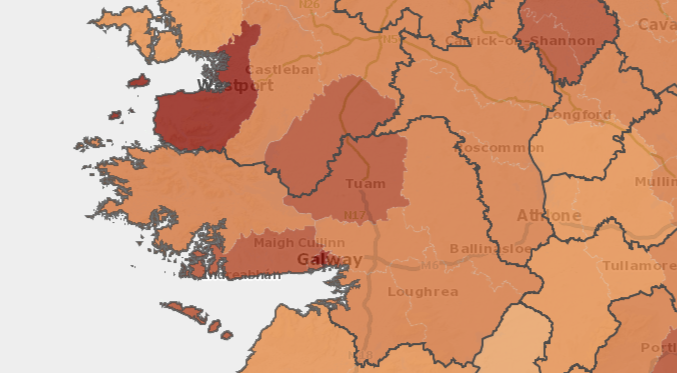 Eight of the ten local electoral areas in Galway now have COVID-19 incidence rates higher than the national average, new data has shown.

Gort-Kinvara and Loughrea are the only areas with rates lower than Ireland’s average – which was 372 cases per 100,000 people when the data was taken this week.

Galway City Central LEA, with the highest rate in the county again this week, is the only area in the county with an incidence rate over 1,000 cases per 100,000 inhabitants.

Conamara South’s incidence rate is the highest it has been this year at 745 cases per 100,000 people (159 new cases in two weeks). Conamara North’s rate is just above the national average at 378, with 65 new cases reported there.

Gort-Kinvara’s incidence rate – 285 cases per 100,000 people – the lowest in the county. A total of 67 people tested positive in the Gort-Kinvara LEA in 14 days, while Loughrea’s rate is just below the national average, at 358 (83 new cases in two weeks).