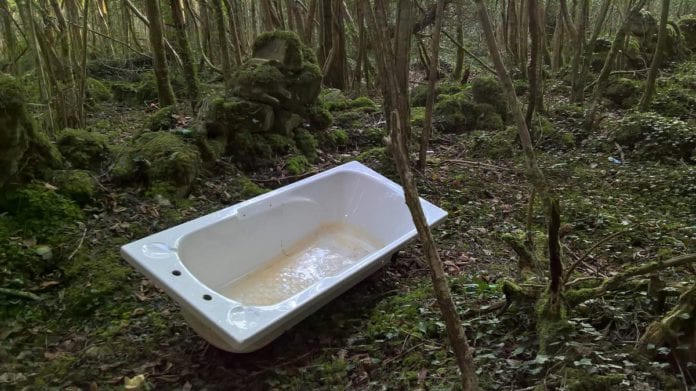 The lack of action by Galway City Council to tackle littering and illegal dumping in the past decade has allowed the situation to spiral out of hand.

That’s according to Owen Hanley, who was recently announced as the Galway City East ward candidate for the Social Democrats.

Hanley highlighted a situation wherein an entire bathtub was found discarded in Merlin Woods at the weekend.

“Everyone is Galway is aware of the littering issues we face in the city, with Ballybane being the most littered urban area in the entire country, but sadly the budget released last week does not represent a Council in which the environment is of any concern.

“Harmful or non-biodegradable rubbish hurts our natural plant and animal life which in turn makes our air less healthy,” he said.

A recent report by UN foreshadowed an even graver future than expected if we continue on the same unsustainable path.

Locally a Climate Extinction event drew over 200 people to Salthill in the face of Atlantic winds earlier this month which Owen Hanley said ‘demonstrates the will of the majority of people for genuine reform and change in how we interact with nature in our city.’

He continued: “The Council should have implemented littering and CCTV warning signs years ago around Merlin Woods to warn off this kind of behaviour, and backed it up with actually enforcing illegal dumping fines.

“This should go hand-and-hand with new and accessible council-funded recycling measures that make it as easy as possible for residents to responsibly get rid of their waste.”