30 years of Ceol, Ól and Craic are being celebrated in Taaffes Bar on Thursday.

This coming Thursday the 11th of October will see huge crowds of people come together to celebrate 30 years of music, drink and craic in Taaffes bar located in the heart of Galway City.

The Lally family originally from Spiddal have been in charge of this business for the last 30 years and it has gone from strength to strength every year.

The Lally’s are no strangers to the pub business with Martin Lally, owner of Taaffes being involved in the industry since he was 17 where he managed his first bar out in Spiddal.

Taaffes bar manager, Pádraig Lally spoke with Galway Daily about life in the pub up to now and the strong link they have not only with music and GAA but also the Irish language.

Martin Lally, father of Pádraig Lally took over the business in 1988 with his main aim at the time being to bring a country pub to the city, an aim he has since succeeded with.

“When my Dad took it over in ’88 he was living in Spiddal. At the time he ran a few pubs around there and wanted to bring the country pub to the city when he took it over,” Pádraig said.

“He put on some trad sessions during the day and again at night time and his goal or aim was to create a country pub in the city so when he did that he just kept it the same and thankfully it’s worked, and here we are 30 years later.”

Billy Lawless had been the owner of the bar prior to Martin Lally and it was a quiet city pub which had no music played in it until Martin took over in 1988 and introduced the trad sessions.

Currently Taaffes have 14 gigs a week and sometimes even more Pádraig explained,

“We have a lot of music, 14 gigs a week, sometimes even more,” he laughed before continuing, “we’ve often had a few musicians come in here at 11’o clock in the morning and start playing a few tunes and then they’re going for the day. We’re open to everything once it’s trad music. If the music is good let them play all day and all night,”.

Taaffes is a family business with the entire family having worked in the pub at different stages, through college and for a bit of pocket money. Pádraig spoke about the day he and his parents went to Taaffes for lunch only a couple of weeks before his father Martin Lally took over the pub.

“I remember before we took over this place my Mam and Dad were in town and I was actually with them that day, I was only nine at the time. I remember coming in here and not knowing much only that we were going for lunch.

“We came in here and we had a bit of food, and my dad was commenting, ‘isn’t the floor lovely, isn’t the bar lovely.’ “I just remember it being kind of unusual how he was paying attention to all these different things and to me it was why is he talking about the floor, and the bar counter”, Pádraig laughed.

“As it turned out he was in to check out the bar which I didn’t realise at the time and then a few weeks later he had me in stacking shelves and filling the fridges and all that kind of stuff.”

Taaffes is not only famous for being a family business or for the numerous trad sessions they hold but also for the very strong link they hold with the GAA. As it stands currently the Galway Senior Football Captain Damien Comer works in the bar alongside a man from Spiddal, Fintan O Cuanaigh who is currently on the Underdogs panel.

Many other Galway footballers have strong links with Taaffes, with football jersey’s and pictures of footballers hanging on the walls, including the jerseys of Seán Óg de Paor and Declan Meehan. Sean Armstrong who recently retired from the Galway Football team this year also worked in the bar for a period of time.

Stories go leor are held within the walls of Taaffes bar, with many famous people visiting the pub over the last 30 years, GAA stars, actors, musicians and managers among them. Colm Cooper, Paul Galvin, Tomás Ó’ Sé, Mick Lally (Miley from Glenroe, RIP), Robbie Fowler from Liverpool, Christopher Llyod from Back to the Future, Former Irish Soccer Manager Brian Kerr, Dolores Keane, Sean Keane and the Clancy Brothers to name but a few of the many stars who have spent some time in Taaffes Bar over the last 30 years.

Pádraig spoke about the service they provide in Taaffes through Gaeilge and the sign they have on the wall, Irish Spoken, English Understood. Irish is a huge part of Taaffes with customers and bar staff regularly speaking in the native tongue.

“My dad’s goal was to create a country pub feel in the middle of the city – we get people in from the Aran Islands, people in from Connemara, and they come here specifically because they know they can speak Irish to the bar tender and that they’ll get served in Irish. It’s what they like,” Pádraig said before referring to the pub as a place where you could also meet the person of your dreams.

Many couples have actually met in Taaffes, be it through working together in the bar or as customers and are still going strong to this day. Some couples have gotten married, and had children while others are still in happy relationships.

“I often say we’ve brought a lot of couples together, but we’ve probably been responsible for a lot of breakups too. There could be a fella supposed to go home hours ago and he hasn’t gone home,” Pádraig laughed.

Gaeilge, Ceol, Ól, Craic, Football, Stars, and Romance; Taaffes has it all and they look forward to celebrating the last 30 years in business with everyone on Thursday night. 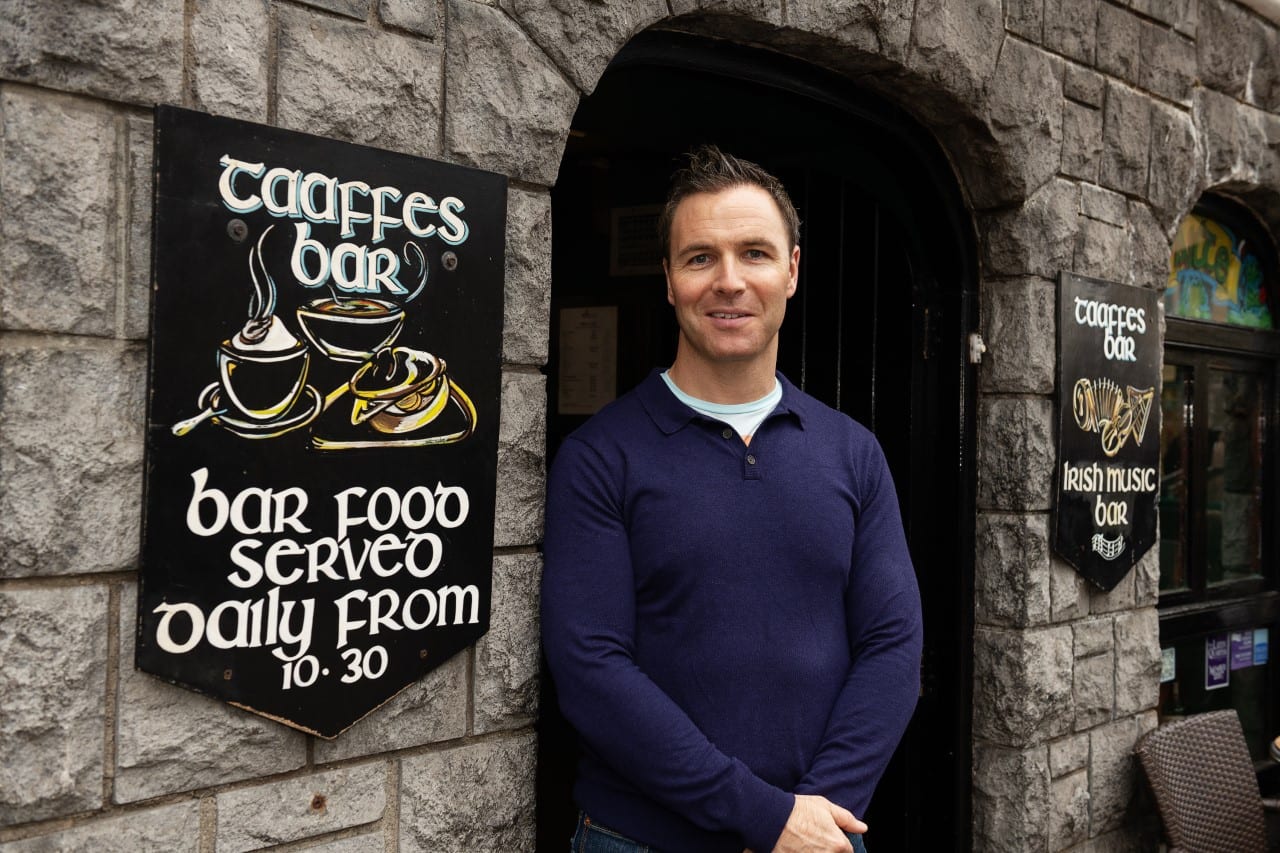 As follows here is the schedule they have planned for the night:

Call into Taaffes on Thursday night, 11th October to join in the celebrations which will follow on through the entire weekend, with plenty of music, drink and craic to be had.