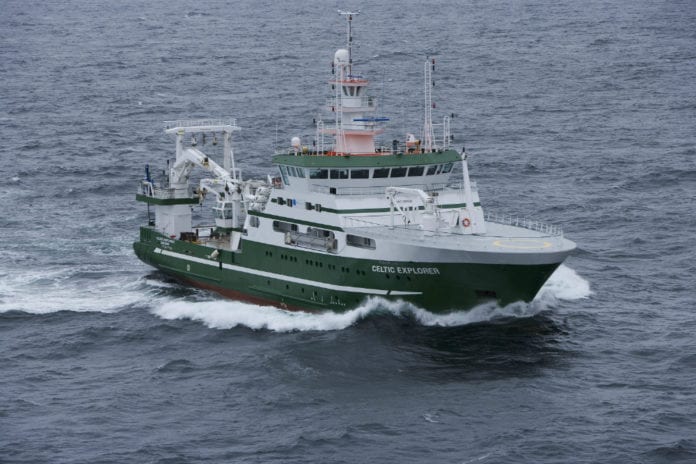 Galway’s Marine Institute has funding nailed down in this week’s budget for a new 50m marine research vessel.

The state of the art research ship is intended to replace the Marine Institute’s older vessel, the 31m Celtic Voyager, which turned 20 last year.

Plans for the new, as yet unnamed, ship were first announced in February, but money has now been secured to begin construction.

When it’s afloat, it will work together with the Marine Institute’s sister research ship, the 65m Celtic Explorer.

Minister for Agriculture, Food, and the Marine Michael Creed announced the ship’s funding yesterday as part of a €133.8 million package for the Department’s Seafood Programme.

But the specific cost of the marine research vessel wasn’t mentioned.

The ship is expected to be commissioned sometime next year and be ready to take to the water in 2021.

According to the Department, the new research ship will provide essential infrastructure to help Ireland address the challenges of Brexit and the Common Fisheries Policy.

It will also be used to further the Marine Institute’s research into the effect of climate change on our oceans, and what impact that could have on Ireland, economically and environmentally.

While going on research voyages, the new ship will be equipped to spend at least three weeks at a time at sea in harsh conditions

In its 20 years of service as of last year, the Celtic Voyager has gone on 595 science surveys.

Its discoveries at sea include mapping over 200 shipwrecks such as the RMS Leinster sunk by a by a German WWI submarine in Dublin Bay a century ago this week, and the famous Lusitania, the passenger liner that was sunk with all aboard in 1915 by another submarine.