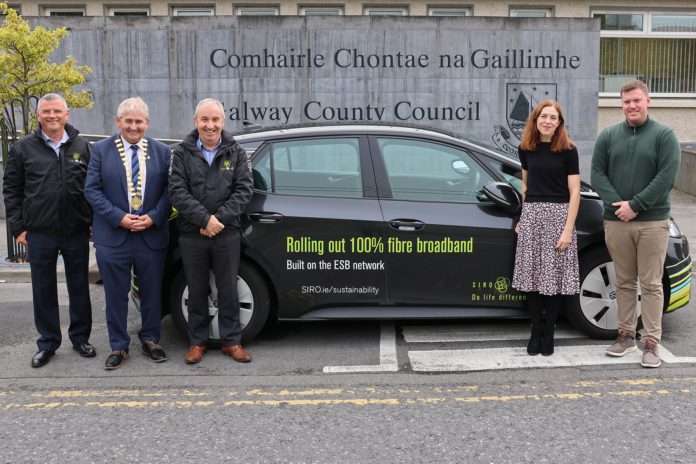 Ballinasloe and Loughrea will see €5 million invested in the development of a new fibre broadband network.

Broadband operator SIRO, a joint venture between ESB and Vodafone, has announced that they are rolling out their fibre network to 5,000 homes in the two towns.

Construction work on the network is due to commence in Loughrea next week, with Ballinasloe to follow next Spring.

These works will expand on the 33,000 homes and businesses in Galway City which the SIRO network is already available for.

Areas within Ballinasloe that will be connected include (but are not limited to): Townparks, Portnick, Poolboy, Dunlo, Kilgarve, Church Street, Bóthar Sáirséal, Meadowbrook, Beechlawn, Esker Hills.

Areas within Loughrea that will be connected include (but are not limited to): Portumna Road, Danesfort, Barrack Street, Abbey Street, Athenry Road, Ashlawn, Galway Road, Gort Road, Main Street, Cosmona, and The Hill.

Galway County Council Chief Executive Jim Cullen said that this is a significant investment in the two towns.

“The delivery of such infrastructure is a key economic enabler for existing business, with the potential to help increase their online presence and to trade online nationally and internationally.

“It will have positive impacts for both towns around growth, economic spin off effects & makes these towns more attractive for future investment.”

The network being built in Loughrea and Ballinasloe will be up to 10 Gigabit enabled, with residential customers able to get 1 or 2 Gigabit broadband speeds initially.

Commenting on the launch in Ballinasloe and Loughrea, SIRO CEO John Keaney said that this expansion reflects the demand for high speed broadband across Galway.

“SIRO is pleased to support this objective and to play a part in giving individuals and businesses a choice about where and how they live and work.”

“We have had positive engagement with local stakeholders on the ground in both towns and we are now excited about getting on with our roll-out and connection process in the months ahead,” added Mr. Keaney.

Rural areas around Loughrea and Ballinasloe have also been targeted under the National Broadband Plan, which is being rolled out by NBI.