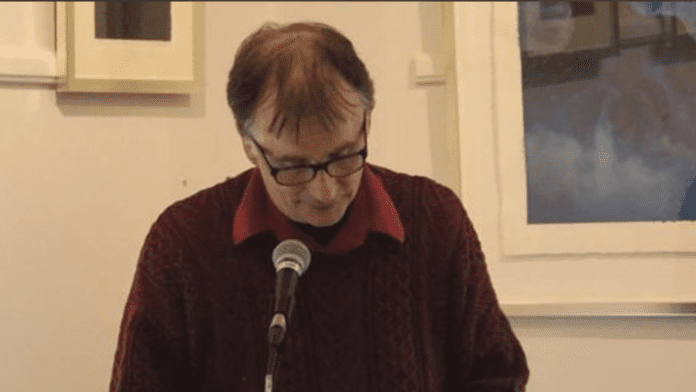 President Higgins described the poet was brave and writing “right to the end.”

“Kevin was a poet who had read enormously widely of the work of poets writing in English, Irish and from different countries,” said President Higgins.

“His work includes that published by Salmon Poetry in collections such as ‘The Boy With No Face’, ‘Time Gentlemen, Please’, ‘Frightening New Furniture’, ‘The Ghost In The Lobby’ and ‘Sex and Death at Merlin Park Hospital’ – were valuable contemporary contributions that had a directness to it that was unsparing, but not at a cost of finely worked poems.”

He said that Kevin’s partnership with his partner in writing, Susan Millar DuMars, saw them both working together in a way hard to surpass in terms of making a contribution to the arts through writing.

“Indeed, I cannot think of anyone who did more to bring the public to appreciation and joy of poetry, to make the case for performed poetry, and who encouraged others to read broadly and, most of all, to make poems and find their meaning in their lives.

“He gave generously to so many through his poetry workshops, poetry slams and creative writing classes in Galway Arts Centre, GMIT and the University of Galway.”

President Higgins added: “His political beliefs were clearly in the family of the Left, but he didn’t shirk from identifying the gap between what was sought, and what he saw as the failure in efforts to deliver it in practice, for the benefit of all in a changed world.

“For those of us who have known him over the decades, there is nobody who would not agree that he was a charming presence and a great friend, guaranteed to never be dull.”

“His final pieces from hospital show a person of the deepest humanity, gifted with words and full of courage that he would wish for all to have for themselves. He will be missed by so many, far beyond Galway.

“May I send my deepest condolences to his great partner in words and their power, Susan, to his family, and to his wide circle of friends.”