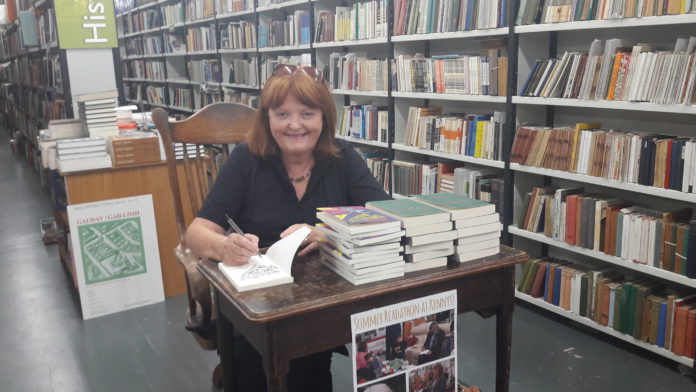 A plaque featuring the poem ‘All in Together’ by Patricia Forde will be unveiled on Church Lane next Wednesday as part of Cúirt International Festival of Literature.

The plaque will be unveiled by Ronnie O’Gorman of The Galway Advertiser at 1pm at the Market Street end of Church Lane.

The poem describes the games that Patricia Forde and her friends played in the area and on the traffic-free streets of Galway city when they were young.

All are welcome along to the unveiling of what will be the 27th plaque on The Galway Poetry Trail – a series of plaques dotted around the city which feature pieces of writing about the places in which they are situated.

Plaques can be found in locations such as on the wall of The Crane Bar (featuring the poem ‘the Crane Bar Galway by Tom French), on Wolfe Tone Bridge (‘Bright City’ by Moya Cannon), Nimmo’s Pier (‘Galway’ by Louis McNeice) and outside Tigh Neachtain (‘The Kasbah’ by Gerard Hanberry).

The Galway Poetry Trail is organised jointly by Kennys Bookshop and Galway City Council and in conjunction with Cúirt International Festival of Literature and has been added to annually since the first plaque was installed in 2005.

A list of the plaques and their locations can be found in Kennys Bookshop, Liosbán, or by visiting kennys.ie/galway-poetry-trail