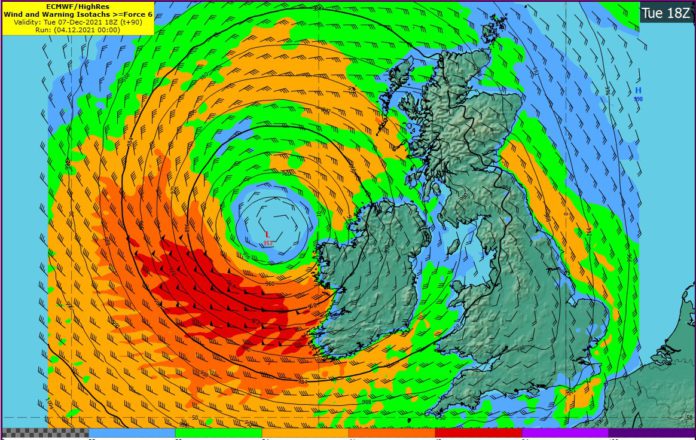 The west coast is forecast to be in for a battering next week, as a weather advisory has been issued for stormy conditions over two days.

Met Eireann has forecasted that an Atlantic depression will bring rough conditions on Tuesday and Wednesay, with a risk of flooding due to wind and rain.

Galway is at risk of coastal flooding due to a mix of the rain, spring tides, and high waves, along with much of the south-west.

A weather advisory has been issued for Tuesday and Wednesday by Met Eireann, with further updates expected on Sunday.

“A deep Atlantic depression will bring very wet and windy weather across Ireland through Tuesday and Wednesday. Winds will be strong in all areas at times and will reach gale force in coastal areas. Severe and damaging gusts are likely.

“At the moment the strongest winds are expected to be in western coastal counties of Munster with storm force winds possible at times later on Tuesday.”

“The strengthening winds will be accompanied by a spell of heavy rain on Tuesday, followed by heavy showers through Tuesday night and Wednesday. Some of the showers may be of sleet or snow on high ground.”

Galway and Munster are currently expected to get the strongest winds from the stormy weather, with gales and strong gales predicted on the coast.

The strong winds, with even more damaging gusts, are likely to cause power outages, as well as disrupt travel due to fallen trees and debris.

Localised flooding, and poor road conditions due to hail or sleet, are also expected to cause some travel disruptions.

Before that Galway is expected for be mostly dry on Sunday, with some sunny spells in the afternoon.

Rain will develop on Sunday night, with some sleet also possible alongside strengthening southerly winds. Highest temperatures on Sunday of eight to nine degrees.

On Monday there will be scattered rain throughout the day, with strong westerly winds in the afternoon, but slacking off headed into the night.