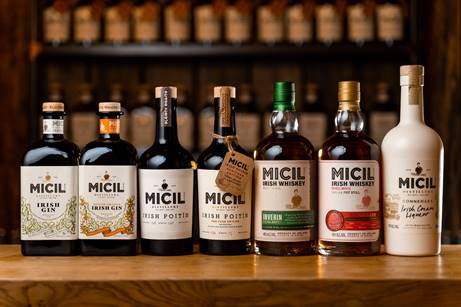 Micil Distillery has unveiled the results of 18 months of innovation and development graft, creating an extensive new portfolio of products.

The new launch of the products comes after exciting year of the distillery which saw the launch of Galway’s first whiskey in over 100 years and the Síolta Mhicil Cask Ownership offering.

Now the distillery is extending its range by launching into two new spirits categories, with four new releases of two Whiskeys, an Irish Cream Liqueur and a Spiced Orange Gin.

The new independently sourced, finished and bottled range of Micil Whiskeys was developed through sourcing mature stocks of Irish Whiskey and maximising their influence on the flavour creation through blending and unique cask iterations.

Micil is bringing its 170 years of craft knowledge and resourcefulness to the whiskey category, creating exceptional Irish Whiskey with diverse flavour and distinct character.

A five-part peated blend with a triple cask finish. Inspired by Micil’s rich distilling heritage, it embodies the fruity spice of the finest Connemara ‘fuisce’ and the peat smoke of the illicit stills & kilns of Inverin. Batch 1 limited to 8,580 bottles.

A fruity, spicy Single Pot Still Irish Whiskey enriched by Bordeaux red wine casks, with hints of soft turf smoke from ex-peated whiskey casks. It pays homage to the great Galway distilleries of the past, and to the Latin wine merchants of old who made the city their home. Batch 1 Limited to 1,140 bottles.

Micil Irish Cream is a West of Ireland take on an Irish Classic. A luxurious blend of sweet Irish Whiskey, rich Irish cream and smooth Connemara poitín from the Micil Distillery in Galway. Inspired by an old family recipe (handwritten as Gaelige on the neck strap), and drawing on a long Connemara tradition of drinks made with cream, honey and a drop of poitín. Made using Micil Irish poitín distilled with 100% malted Irish Barley.

A reimagining of our classic gin, distilled with handpicked Connemara flowers and herbs, and enriched with vibrant orange zest and warm rounded spice. Handcrafted by the Micil family at Galway’s only distillery. Initially launched as a collaboration with Craft Gin Club UK in October 2021 where 110,000 bottles were purchased.

All products will be available from McCambridges of Galway, Celtic Whiskey Shop & online at Irishmalts.com from December 2nd 2021.

Micil Distillery are Galway’s only operational distillery, producing Galway’s first whiskey in over a century.

For over 170 years the family craft has been handed down through each generation using Irish, which is still the spoken language at the distillery today, and the Micil family represents Irelands longest unbroken family distilling tradition.

Limited edition Hyde Gin has a great depth of character