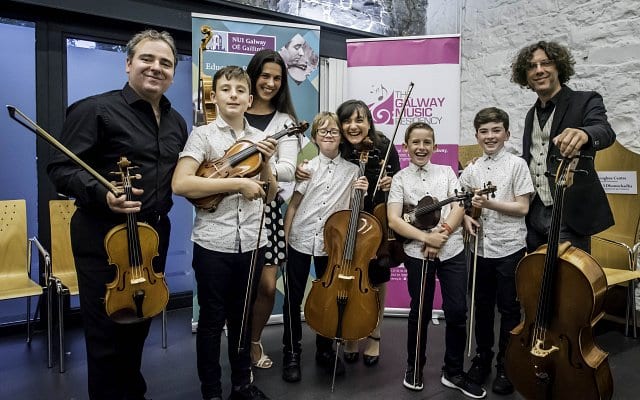 Galway Music Residency is launching a three year series of concerts this week performing the music of 27 European countries for Galway audiences.

The lunchtime concerts in the From Europe with Love programme will see a string quartet performing music from all over Europe on the first Tuesday of each month starting on September 4.

It’s kicking off with the musical stylings of France this week, followed by the Netherlands in October, and Malta in November.

The concerts were announced at the launch of GMR’s Autumn/Winter programme by Artistic Chair Jane O’Leary.

The three year project, which will be held at St. Nicholas’ Collegiate Church in the city, is part of the build up to Galway’s year as the European Capital of Culture in 2020.

GMR’s programme of events for the latter half of this year was launched by Dr Aidan Thomas, Director of the new BA in Music at NUIG, at the university’s O’Donoghue Centre.

Other musical highlights to look forward to this season include the popular 3 Saturdays: 3 Kinds of Music sponsored by LK Shields Solicitors and curated by Matthew Berrill, which is returning to the Mick Lally Theatre in November.

The GMR’s flagship group the ConTempo Quartet are back bringing music to rural corners of Galway this December with ConTempo Countywide, performing in Ballygar and Oughterard.

The Galway Music Residency was established in 2002 to cultivate music in Galway through performance and mentoring, with a professional ensemble at its core.

Education remains an important part of that, with a renewed focus on getting young people involved in music this season.

As well as the three university-level ensembles it mentors, Galway Music Residency is working with its first ever group of junior performers Voldemort Quartet, who charmed audiences at the launch with their performance.

GMR will also continue its partnership with NUIG by working with MA in writing students, the university orchestras, and the BA in Music launching this month.

At a secondary school level a piano workshop focused on Gerald Barry’s Piano Quartet is being developed for the Leaving Cert.

The ConTempo Quartet will also carry on mentoring the members of Sym-Phonic Waves, the new youth orchestra for the West of Ireland created as part of the bid for Galway 2020.

Following on from the wildly successful screening of horror-classic Nosferatu last Halloween, this year the ConTempo Quartet will perform a live-score for Buster Keaton’s The General.

This 1927 silent action-comedy follows the true story of an train chase during the American Civil War.

For a unique chance to hear renowned musicians providing a live-soundtrack for a cinematic masterpiece, head down to the O’Donoghue Centre at NUIG on Tuesday, October 30 at 7pm.

For more information on these events and many more, find a full brochure here