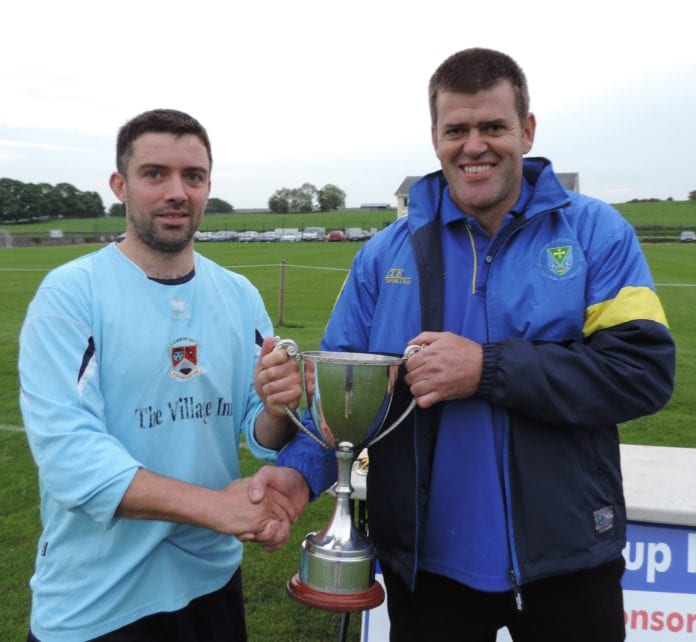 Kilkerrin United completed an historic treble on Saturday evening in Lecarrow when they defeated Hodson Bay Athletic 2-1 to add the RDFL First Division Cup to the RDFL Division One Championship & the TP Brennan Connacht Shield. Hodson Bay started the brighter and were unlucky not to have taken an early lead when a close-range effort came back off the post.

Declan Murphy broke the deadlock in the 24th minute when he rifled home a shot in what was Kilkerrin’s first attack. In the 44th minute Keith Mahon was upended in the penalty area and Declan Murphy doubled the lead from the penalty spot. Hodson Bay Athletic pulled a goal back early in the second half but they were unable to find an equaliser and Kilkerrin held on for victory.

Well done to all the players & management on a remarkable season.

U14 girls had an impressive win over Ballaghaderreen FC on Saturday.
U16 girls played in a blitz in Newbridge on Friday. Thanks to Shiven Rovers for arranging the event.

U11 boys hosted Glen Celtic Friday evening. Eoin Morrisey, Shay Collins, Tiernan Kilmartin & Sam Nolan were all on target for Kilkerrin in a great team performance. Well done to both teams and all involved.
U12 boys drew 2-2 with Glen Celtic with Cillian Brennan & Enda Keane on target.

U14 boys drew 3-3 with Skyvalley Rovers thanks to an Oisín Keane hat-trick.
U16 boys had a hard-earned 2-1 win against CP Ajax with goals from Ciarán Lee & Cathal Fallon.

Many thanks to all who supported the club by purchasing an annual lotto ticket.
Congratulations to the boys and girls who made their First Holy Communion in Clonberne on Sunday last.

U14 Boys had a league win against Ballinagare 1-0, Scorer Eugenio Neto.
U12 Boys had a very exciting 2-2 draw against Kilkerrin, the Glen Celtic equaliser came in the last minute of the match. Scorers Leo O’Connor and Dylan Joyce.
The U9s had a difficult test against Roscommon on Sunday evening in Glenamaddy in the rain, both Europa and Champions teams played great football and kept trying.
The U12 girls had their first match of the year in Castleplunkett.  The final scoreline of 5-1 did not reflect what was a very entertaining game. The side netting, goal posts and Castleplunkett goalie all stopped the girls from scoring.   Scorer Courtney Parsons.
The U16 girls had their first outing of the year playing in a Blitz hosted by Shiven Rovers.
The U8 girls played a friendly against Dunmore last weekend.  It was great to see 26 girls togged out for Glen Celtic.
Glen Celtic plan to host 2 Summer camps this year.  First camp will run 2nd to 6th July and the Second camp will run 13th to 17th August. Summer camps are for boys and girls.   All children MUST be booked on to a camp before the camp starts.   Bookings can be made at www.summersoccerschools.ie OR call 1890 653 653
Date and venue for the Divisional Cup final for the Senior team is still not yet known but please check GlenCeltic AFC Facebook page for latest match fixtures and training schedule.  https://www.facebook.com/glenceltic.soccerclub

Details of upcoming and recent events will be online at 6pm every Tuesday.