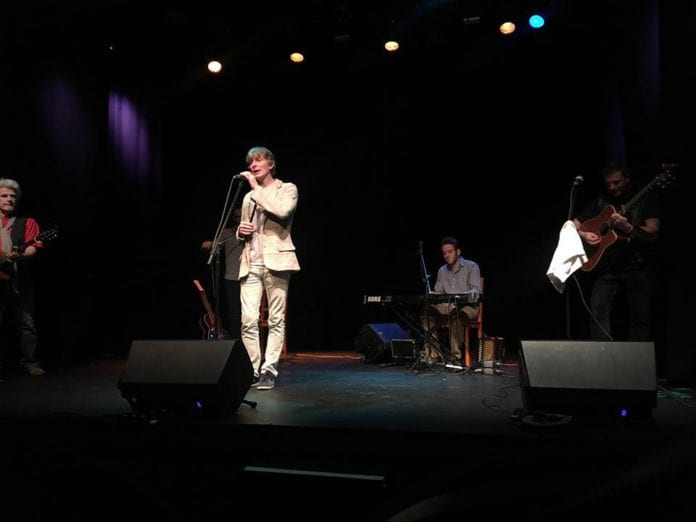 The Opening night of Seán Keane at An Taibhdhearc was full of music, craic and devilment lastnight.

Last night, Monday 21st May saw the opening night of Seán Keane at An Taibhdhearc where he entertained an intimately small crowd with help from his fellow musicians.

Alongside Seán Keane on the night stood the Connemara man in black, Pat Coyne, the man from Belfast dressed in red, Fergus Feely and the two boys in blue, Foxford men, David Doocey and Stephen Doherty.

Brother to the award winning singer, Dolores Keane, Séan Keane described as the distinctive voice of Ireland embarked on his solo career in 1993. ‘All Heart, No Roses‘, received rave reviews and was chosen as ‘Debut Folk Album of the Year’ by Q Magazine.

‘A Portrait’, a collection of Seán’s songs, is a multi-platinum Irish seller. All of his solo albums are platinum sellers and remain in constant demand.

Six solo albums later, Seán Keane continues to delight audiences all over the world with his live performances and recorded work.  He tours regularly with his band in Ireland, Austria, Germany, the US and Canada, as well as appearing at major festivals world-wide.

Last night he wasn’t alone. Dressed in white as he took to the middle of the stage, with the man in black to one side of him and the man in red to the other while the two boys in blue, sat coyly behind.

It was clear to see that these musicians were well used to playing with one another, as they laughed and joked on stage. The chemistry between them made the show so much more enjoyable.

With Seán suffering from a dose of a chest infection we were also treated to songs from his two wingmen. In the first half Pat Coyne gave us a song, while in the second half Fergus Feely, sang about work.

The night in itself was very enjoyable, with plenty of laughter, singing and music with the audience often having the urge to get up and jive.

“As one of the younger people who attended the opening night it was very enjoyable and something I would recommend everyone to go see,” said Brooke McGahan who had front row seats.

“The mix between trad and country/bluegrass made for a really dynamic set. It was a real treat for anyone that appreciates raw talent and the art of live music.

“My toes were continuously tapping to the music with the rhythm being infectious, you could hear it throughout the crowd.

“Galway is certainly lucky to have them for the next few weeks and I would recommend everyone to go see them, especially the younger generation as they really open your eyes to music,” she added.

Seán will be back in An Taibhdhearc every Monday for the next 9 weeks.

More information can be sought through emailing An Taibhdhearc at: eolas@antaibhdhearc.com.

Tickets are available from An Taibhdhearc’s Box Office on 091-562024 or online here.