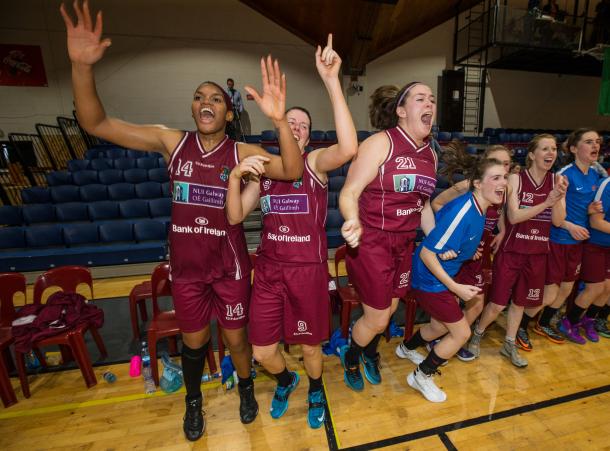 The National Basketball Cup semi-finals take place this weekend in Cork (January 5th – 7th) with teams from across the country competing for final places at the end of the month.

The Mardyke Arena in UCC and Neptune Stadium will host 20 games over the three days across 10 competitions with Galway teams vying for three places in the National Basketball Arena.

NUIG Mystics compete in the National Cup semi-finals and will take on DCU Mercy on Saturday (4pm) in the Mardyke Arena.  Mike Murray’s team will be under pressure against the Super League table toppers who beat 74-46 in Colaiste Iognaid four weeks previously.

“After meeting them in the league recently where they beat us quite easily, DCU will be hot favourites going into the semi-finals,” admitted NUIG Mystics manager Mike Murray whose side have still to get their first win in the top flight. “We know we have a lot of work to do to reverse the result, but we’re delighted to be in the semi-final now and have a chance to do just that.”

Sarah Woods, Alex Masaquel (December’s National Player of the Month), Rachel Huijsdens and Aisling Sullivan will be DCU’s chief threats having shared 53 points in the league meeting but Mystics have gained momentum in the Cup.

They defeated IT Carlow 84-77 in November before getting past Portlaoise Panthers in the quarter-finals.  Aine McDonagh is their top scorer with 52 points but they’ll also need Deja Bullock, Dayna Finn, Hannah Coen, Jade Johnson and Maggie Byrne on form to deliver a shock result.

Catch the game LIVE! on Basketball Ireland’s Youtube page by clicking HERE from 3.50pm on Saturday

The other semi-final takes place just beforehand in the Mardyke Arena (2pm) when Ambassador UCC Glenmire clash with SuperValu Brunell.

Maree will be represented in the National Intermediate Cup semi-final when they face St. Mary’s, Castleisland at 12pm in Neptune Stadium.  They defeated Team Kerry 71-46 in their opening round before getting past Tridents Dublin 54-46 in the quarter-final.

Michelle Fahy, Carol McCarthy and Coleen McInerney will be ones to watch if Maree are to make a National Final.  Meteors meet Killester at the same time in the other semi-final Mardyke Arena.

Catch the game LIVE! on Basketball Ireland’s Youtube page by clicking HERE from 11.50am on Saturday

Moycullen’s under 20 men’s side also travel to Cork when they meet Neptune on Saturday at 2pm in the Neptune Stadium.  They were 77-66 winners over Maree in the opening round before getting pasted Dublin Lions 79-70 in the quarter-final.

Paul Kelly, John Hackett, Connor Curran and James Connaire are Moycullen’s chief scorers as they look to continue their winning ways.  KUBS face KCYMS in the other semi-final at the same venue (10am).

Catch the game LIVE! on Basketball Ireland’s Youtube page by clicking HERE from 1.50pm on Saturday

And it’s an extra busy weekend for Moycullen who are also in Super League action on Sunday (3.30pm St. Vincent’s BC) when they take on DCU Saints.

They put 117 points past UCC Demons away last week and another massive result could pull them clear of the relegation zone.

Saints are in a similar situation with just five wins from 13 games, three points behind Moycullen who have six victories.  But after sharing 77 points in their recent win, James Loughnane, Brandon McGuire and Patrick Lyons will hope to continue that form and bring Moycullen into mid-table.