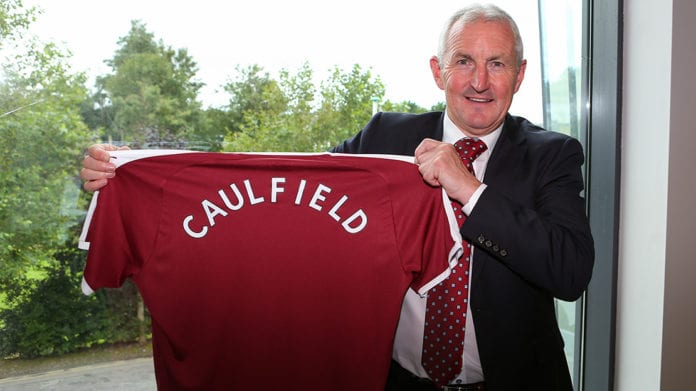 New Galway United manager John Caulfield has said that his new job will require a huge amount of work but he is 100% committed to winning promotion next season.

Caulfield won the premier division as a as a player and manager with Cork City, and has joined Galway United an 18-month contract.

He said that there’s work to be done, given the club finds itself 10th in the first division with just five points after eight games.

“Right now, we’re not where we should be as a club, there is a massive job ahead and we’ll face challenges, but I’m hopeful that I can be the man to bring success to the club,” he told galwayunitedfc.ie

For those hoping for a few new players, it looks like they will have to wait until next season.

“Due to the fact that there are only ten league games remaining and the transfer window is closed, it’s very difficult to bring any new players in unless they’re out of contract,” said John Caulfield.

“I’m going to work with the players that are here, I think there’s a lot of potential and we’ve got a number of players out injured at the moment, so hopefully they’ll come back into contention soon.”

Asked why he was attracted to the job, Caulfield said that he always felt during his playing career that ‘Galway United were a huge club, competing at the top of the Premier Division for many years in the late 80s and 90s’.

“Obviously as we know in the last while since the club got relegated, it’s been very difficult to get back up, but there’s still enormous potential within the club, great facilities, a massive city, a great area,” he said.

“You look at the west of Ireland and all the good players that have come from Galway, Mayo, Roscommon, Limerick and Clare. That’s a huge area and we need to develop a very strong local west of Ireland team down the road.

“Sligo have done that and Galway United always had that before, but it has dropped off and we haven’t been competitive for a long time, so it’s my aim to get back and make us a competitive team.

“It’s unfortunate that there aren’t crowds coming to games at the moment because I do know when Galway are challenging and very competitive, there’s great local support. Hopefully over the next 18 months that will happen.”