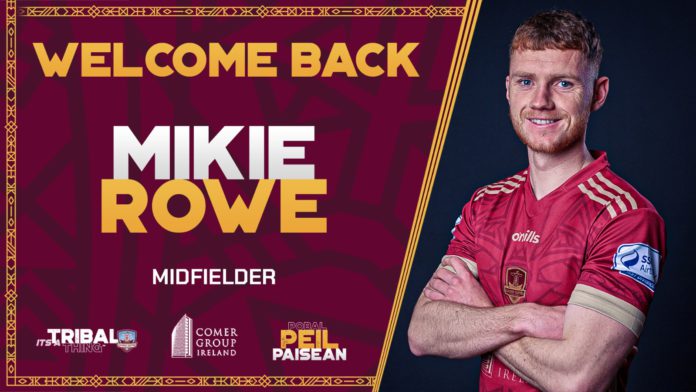 Galway United has announced that Mikie Rowe has re-signed with the club to return for the 2023 season, after a strong start last season.

Rowe made 25 appearances for United this year, contributing five goals and two assists to the club’s scorecard.

Three of those goals came during the play-offs against Longford, where United had a very strong showing in their three games.

Speaking with the club’s media team, he said of his decision, “A big part of my decision in coming back was that I could see the club going places, with a big part of that being the fan base.”

“They were exceptional all year, home and away. The fact we got close to two thousand for a game in Limerick in the playoffs was incredible.”

“That’s a big boast for the players and gives us massive hope that the club is going places, so it’s great to still be a part of that.”

The Wexford native began his career with the then Waterford United. He spent two seasons at the RSC before departing for America to play college football with Young Harris College in Georgia.

He was named the United Soccer Coaches NCAA Division II Men’s National Player of the Year for the 2018 season, where he averaged better than a goal a game.

With an additional spell at Tormenta FC for two seasons, Rowe spent five and a half years in total across the Atlantic, before returning to Ireland and signing on with the Tribesmen.

During his time in the States, Mikie Rowe picked up great experience in a versatile attacking role, serving a winger, attacking midfielder, and striker.

Further updates on the Galway United squad for 2023 are expected in the days and weeks ahead.