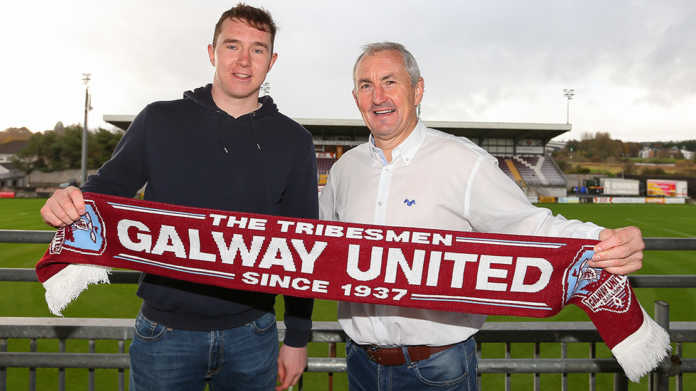 Galway United has made their first signing for the 2021 season with the addition of striker Padraic Cunningham to the team.

The 24 year old Headford native is returning to Eamon Deacy Park, where he spent four seasons starting in 2014, after a spell playing for Galway GAA.

Galway United manager John Caulfield said that Cunningham is an “aggressive” player with “lots of pace”, with great potential to benefit the Tribesmen.

“He’s at the perfect age and has a great attitude. He wanted to get involved and he’s keen to make a big impression next year.”

“Most importantly, he wants to play and he knows it’s going to be a big year for him. He was hell bent on coming back to the club, so it was an easy deal for me to conclude.”

It was recently announced that veteran striker Vinny Faherty would be retiring after a 14 season career, which saw him finish up his career back at his hometown club this season.

Faherty is one of six players departing Galway United in the off-season, along with Jack Lynch, Josh Smith, Timo Parthoens, Joe Collins and Conor Barry.

John Caulfield came on as the new manager for United partway through this season, with the club undergoing a startling turnaround that saw the Tribesman engage in a string of victories, ending just shy of qualifying for promotion to the Premiere Division.

Next year’s season will see Caulfield able to shape the team more to his style as the club continues to sign new and returning players.

Caulfield had been a fan of Cunningham while he was managing Cork City, and when the two spoke about his plans, it was easy for the striker to sign on.

“John has done a fantastic job since coming in and I’m over the moon to be joining for next season.”

“Knowing that John is a manager that has huge belief in me is massive. He’s a great man to learn off, he’s won it all as a player and manager and I’m looking forward to working with him.”

“It feels like it’s really promising times ahead and that the club is headed in the right direction.”