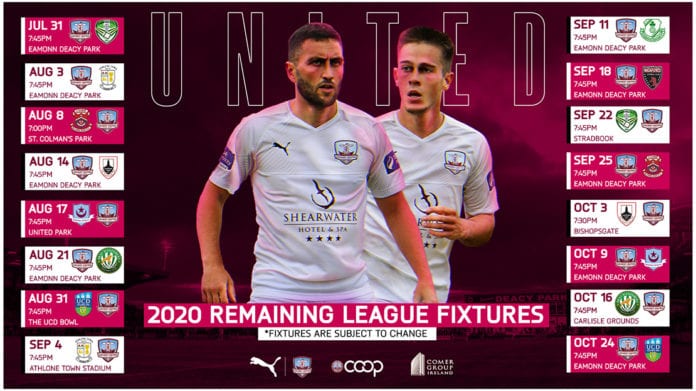 Galway United will get back on the field for the 2020 Airtricity League with a home game against Cabinteely at the end of this month.

Fixture of the remainder of the League of Ireland were released on Monday, with the season set to resume on July 31 after months of cancellations due to COVID-19.

In the First Division of the SSE Airtricity League, Galway United will have their first match against Cabinteely at Eamon Deacy Park on July 31, kicking off at 7:45pm.

That will be followed just a few days later with another home game against Athlone Town on Monday, August 3, the same day Longford Town will face the Bray Wanderers at Bishopsgate statium.

Galway will then face the Cobh Ramblers that Saturday, August 8 at St. Coleman’s Park for their first away game.

Then it’s back home for a match against Longford on Friday, August 14, followed by Drogheda on their turf the Monday after, and finish the month with a match up against UCD in Dublin.

The full list of fixtures, including the remaining nine games to be played from the start of September through to late October, can be found here.

The First Division play-off semi-finals will take place on Tuesday, October 27, followed by the final that Saturday, October 31.

The Promotion/Relegation play-off final for the is scheduled for Sunday, November 8.