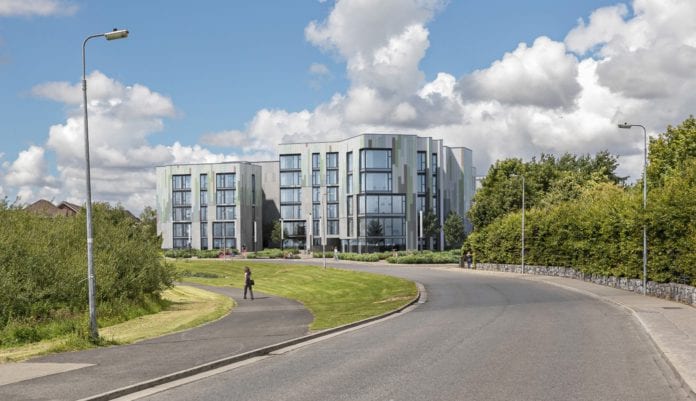 Plans have been submitted for a massive expansion of the Cúirt na Coiribe student accommodation complex in Terryland, adding hundreds of new bed spaces.

Exeter Property Limited has made a Strategic Housing Application directly to An Bord Pleanála for this student accommodation development.

The project would involve demolishing a two storey building at the entrance to the site, towards the eastern boundary, as well as removing the top, fifth, floor of the main building.

The main building building will then be expanded with horizontal and vertical expansions.

These will contain a total of 920 student bed spaces spread among 868 bedrooms, an increase of 515 bed spaces on what is currently there.

All of this will be provided in a single building made of nine interlinking blocks ranging from two to six storeys in height.

The developer also proposes a total of 59 car parking spaces, 43 basement and 16 surface spaces, as well as 656 bicycle spaces and 5 motorcycle spaces.

This would reduce the car parking provision across the site by 92 spaces across the site, by converting most of the underground parking area to bicycle spaces.

The application notes that this site is just 1.3km from Eyre Square, and 1km from the NUI Galway campus, and is close to existing and planned bus routes.

“There is a significant number of students who avail of active modes of transport to reach their campus or to access other parts of the city.”

“This is a sustainable and healthy alternative to car use, which at such short distances would be unrealistic for most able-bodied residents.”

Along with 398 bed spaces in the main student accommodation building, Exeter also proposes to retain ‘Scotty’s Steakhouse’ restaurant on the ground floor of the main building.

The new design would include a greater amount of space for students to “congregate socially” than in the existing student accommodation through internal courtyards and other indoor social areas.

“These social spaces are recognised as a key benefit for mental health and thus have a important role to play in the scheme.”

“There will also be a provision of multiple quiet study/library spaces to allow students study, with these spaces becoming increasingly important as nearby universities expand their student populations in the coming years.”

Public submissions related to this project can be made to An Bord Pleanála until July 21, and a decision is due on this planning application by October 6.