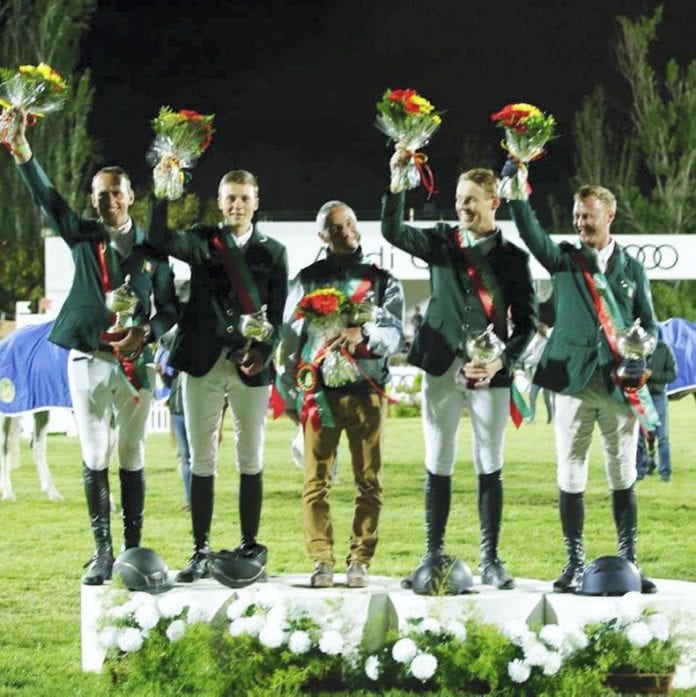 Turloughmore’s Michael Duffy enjoyed victory in Portugal on Friday (1st June) when he was part of the four-man Irish side that won the Longines Nations Cup in Lisbon.

Tipperary’s Trevor Breen, who delivered the only double clear in the competition with his horse Bombay, Paul Kennedy and Anthony Condon were Duffy’s team mates.

Ireland were joint second after the first round with Condon also going clear on SFS Aristio with Kennedy’s ride on Cartown Danger Mouse scoring eight faults.

Belguim were the halfway leaders but Breen’s second clear round coupled with only one fence each dropped by Condon and Duffy, riding Jule Van Den Tinnenpot. Gave Ireland an advantage with just 16 faults.

Belgium finished as runners-upon 21 faults while USA finished third of the nine teams that took part on 28 faults.

“I want to congratulate Taylor Vard (Chef d’Equipe) and his team on a fantastic result in Lisbon,” said Horse Ireland CEO Ronan Murphy to The Irish Field.

“A special mention must go to the owners of our fantastic horses for making them available to the Irish team and to all the backroom staff that put in such hard work to help make this happen.”

“It was a great competition,” added Vard. Congratulations to Belgium and to the United States, they gave us a good fight, but it was our night.”