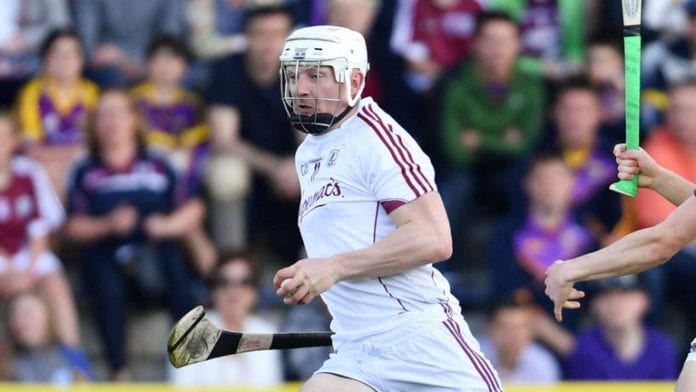 Galway hurling supporters were concerned on Saturday when Joe Canning had to depart early following a blow to the knee but the Hurler of the Year has eased supporters concerns ahead of the Leinster Hurling Final on July 1st.

Canning hit 12 points in the Tribesmen’s comfortable 1-23 to 0-17 victory over Wexford in Innovate Wexford Park to qualify for their fourth consecutive provincial decider.

As well as getting his 450th career championship point, Canning also entertained the travelling support with two sweetly struck sideline scores going over the par to keep Davy Fitzgerald’s charges at bay.

“It’s a little bit sore,” said Canning to Sky Sports’ Máire Treasa Ní Cheallaigh.  “Just a belt of a hurl, that’s all.  A sore one to get but it’s fine.  It’ll be grand in a few days.

Also spoke to @SkySportsGAA Man of the Match Joe Canning and his knee was wrapped in ice but he thinks it was a knock and hopefully no damage done. Galwegians can exhale! @SkySportsGAA

“It’s good (winning), especially coming down to Wexford Park.  It’s a hard place to come and get a result as lots of teams have found out over the years.  Just to get down and get a result was the main thing for us.

“They set out with a sweeper.  It’s very hard to break them down.  But I think we just worked hard today.  That was the big message we always put out is to work as hard as we can.

“Early on in the year in the league, we came down here and lost to Wexford.  So, we wanted to right that and get a result today and luckily we did.”

Galway’s final round-robin fixture in the 2018 Leinster Senior Hurling Championship is against Dublin on Saturday, 9th June.  Throw-in at Pearse Stadium is 7pm and it will be proceeded by the All-Ireland Senior Camogie Championship meeting between Galway and Clare at 5pm.