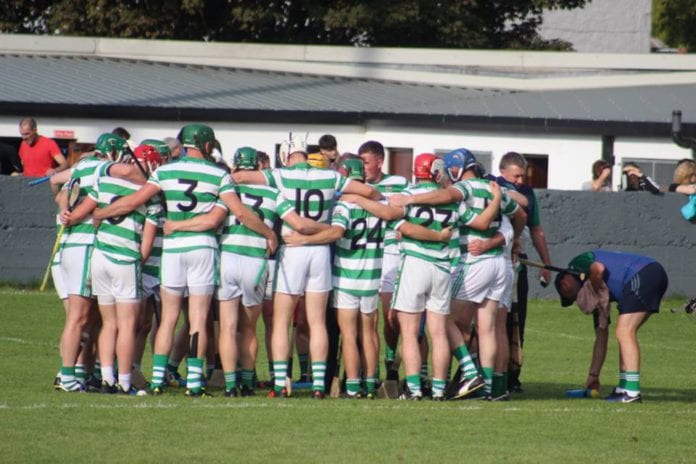 Mullagh saved their season on Saturday (1st September) in Duggan Park, Ballinasloe as a late rally gave them their first win in 2018.

Trailing 0-18 to 2-10 with nine minutes remaining, David Glennon’s team were staring elimination after April losses to Loughrea and Sarsfields.

But with Davy Glennon and Cathal Dervan controlling affairs, Mullagh edged the final 10 minutes by 0-6 to 0-2.  The duo shared five while Davy Glennon sent a long ball from his own half down the right for Sean Hardiman to score a crucial 60th minute point.

It would have been a blow for Mullagh had they left with nothing after starting both halves with early goals.  Hardiman struck on eight minutes as they built a 1-3 to 0-2 lead while Eoin Dolphin kicked off the second half with a major after Cappataggle pulled level.

If anything, Cappataggle’s poor first half return cost them dearly and they could have effectively secured a preliminary quarter-final spot.  Nine wides didn’t help but they did stay with their opponents and scores for Ronan Garvey, Alan Dolan and Michael Garvey made it 0-11 to 1-8 at half-time.

And after Dolphin’s goal, Cappataggle came back again through Dolan, Jarlath Mannion and Nevin and the teams were level eight times over the hour.

It mustn’t be forgotten that Mullagh keeper Eric Ward produced two top drawer second half saves while Jarlath Mannion’s low drive in injury time to win it for Cappataggle shaded the wrong side of the post.  But Mullagh showed character to take the initiative and the win.

This thrilling derby clash delivered but now both teams face an uphill challenge.  The tightest of groups has Gort, Loughrea and Sarsfields on four points, two ahead of Cappataggle, Mullagh and Portumna entering the final two rounds.

Sarsfields entered Round Three with a 100% record but were blown away by Gort on Sunday (2nd September) as the 2016 and 2017 county finalists won 1-24 to 0-14 in Kenny Park.  Kaelan Higgins got the second half goal after Gavin Lally saved a penalty before the break.

And what could be the group’s most important few minutes, Loughrea came from behind in the final six minutes to hit five points unanswered in Kenny Park as they beat Portumna 0-20 to 0-17 in the latest instalment of their rivalry.

Round Four sees Portumna meet Cappataggle in what looks a survival battle while any points for Gort, Loughrea and Sarsfields will ensure qualification.  But with two points separating all six teams, each match will carry a cup final feel during September.