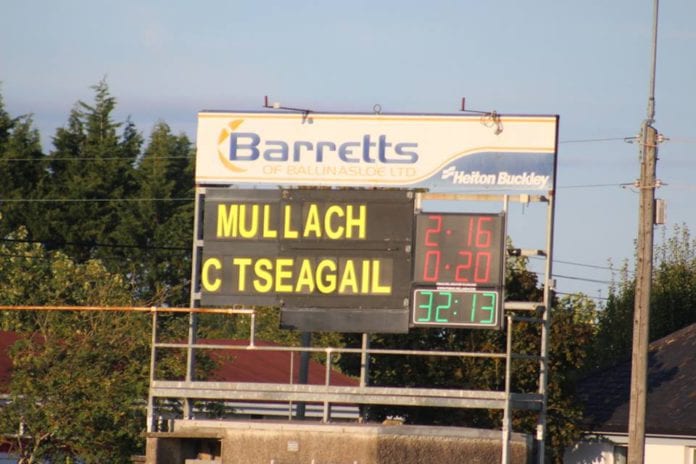 Mullagh’s 2-16 to 0-20 victory over Cappataggle in the senior hurling championship last Saturday (1st September) was crucial in a tight Group Two as it kept them in the hunt for one of the four coveted qualification spots.

With Gort and Loughrea getting wins over Sarsfields and Portumna respectively, a Cappataggle win would have left four teams four points clear of Mullagh with only two games remaining.

Goals for Sean Hardiman and Eoin Dolphin gave Mullagh a strong start to both halves but it was a late rally inspired by Davy Glennon and Cathal Dervan that got them over the line afte they trailed by two points with nine minutes remaining.

“It was very important,” said Mullagh manager David Glennon afterwards.  “We had to keep our season alive.  If we’d lost there today, it was curtains.  We knew that and we said we’d give it 110(%) and that’s what we done.

“Cappy (Cappataggle) always stayed in touch.  But it was vitally important we got a good start.  We figured if we could be with them at half-time going in, we’d give ourselves a great chance.  And that’s what we done!

“We were a bit annoyed with ourselves.  A couple of short puck outs went astray which we didn’t intend to.

“But we’re here and we’re alive and we’re kicking.  And we’ll drive on from here.

“We said that we were all going to stand up to a man and we’d die fighting with our boots on.  That was our plan and that’s what we stuck to.

“This victory will be hollow if we don’t drive on from this.  But it will give us confidence and it gives us a shout at it now anyway.”

Mullagh meet Gort in their next outing of the 2018 Senior Hurling Championship on Saturday, 15th September.  Throw-in at Kenny Park, Athenry is 4pm.