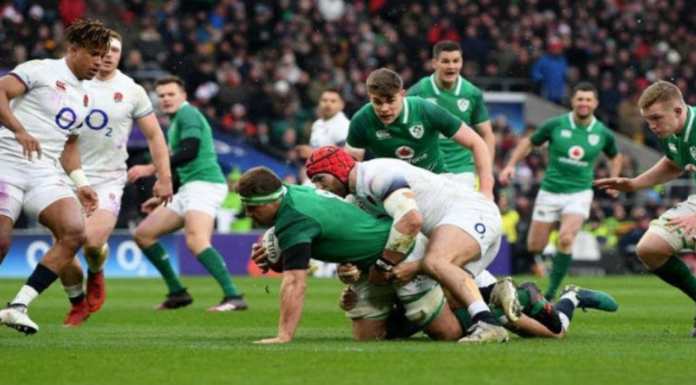 In the year 2000, the 5 Nations became the 6 Nations, and since then the Irish rugby team have won 2 Grand Slams, 4 Championship titles, and 5 triple crowns (they beat England, Scotland, and Wales). This is a nice trophy haul, and during this time they have played in some classic 6 Nations matches. I am now going to take you on a trip down memory lane and take a look at some of the very best.

This was a Grand Slam decider, and the Irish players had the opportunity to be just the third Irish team in history to win the Grand Slam. However, there was a steep challenge ahead of them in the shape of an English team that had not lost in 14 matches at Twickenham. Ireland came flying out of the starting blocks and the Twickenham crowd were stunned into complete silence thanks to first half tries from CJ Stander, Jacob Stockdale, Gary Ringrose to give the away side a 21-5 lead at the break. England came fighting back in the second half, but the Irish defence stood firm to ensure that those of a green persuasion would have a great St. Patrick’s Day. This Grand Slam would not have been possible had it not been for Johnny Sexton’s late Drop Goal against France in the opening game of the campaign. Therefore, we can say that this defeat of England in their own backyard was the cherry on top of Ireland’s Grand Slam cake.

I remember this match really well because I was at Twickenham with my grandad, who passed away just two weeks ago. My grandad, also a supporter of Gaelic football, had been following the Irish team for 50 years and the smile that he had on his face when the ref blew the final whistle is something I will never forget. I thought it was because Ireland had won the Grand Slam, but I later found out that he had placed €100 on Ireland to win the Grand Slam before the tournament started. My grandad was a tech savvy guy and used https://www.mybettingsite.uk/ to find the best odds. In his memory, and also to take advantage of some great betting odds, I now use this website.

This was Joe Schmidt’s first 6 Nations Championship in charge of Ireland, and the New Zealander guided Ireland to their first title in five years, which was sealed with a tense win in Paris. This was to be Brian O’Driscoll’s last game for his country and every man put in a monumental effort to ensure that he retired with a bang. Ireland went into this match knowing that anything other than a win would mean that England would win the title as they had beaten Italy earlier on in the day. History was against them as it had been 14 years since they beat France in Paris. Two Sexton tries and seven points from the tee alongside an Andrew Trimble try saw Ireland with a 22-20 lead with just 15 minutes remaining. The French bombarded the Irish tryline for the remainder of the game, but the Irish did not give a quarter. O’Driscoll announced himself on the international stage in Paris, so it was only fitting that he ended his career there with a trophy.

It had been just over 60 years since Ireland last won a Grand Slam, and they traveled to Wales with the chance to put that long drought to bed. In a very lively game, Wales led 6-0 at the break thanks to a couple of penalties from Stephen Jones, but Ireland sprung into life in the second period with a try apiece from O’Driscoll and Tommy Bowe. However, Jones knocked over two more penalties to edge his side closer to the Triple Crown. With around 2 minutes left on the clock, Ronan O’ Gara delivered a drop goal to send the traveling Irish fans into raptures. However, the drama was not over. With the last kick of the game, Jones had the opportunity to break Irish hearts with a penalty, but his effort fell just short and Ireland claimed the Grand Slam.

In 2004, Ireland gave the reigning World Champions their first loss at Twickenham in five years, and three years later they arguably got an even more impressive win, albeit at home. Landsdowne Road had been demolished and Ireland were playing at Croke Park while they waited for the new Aviva Stadium to be built. The fact that the English were heading to play their very first match at Croke Park made the encounter historic enough, but Brian Ashton’s England team decided to get some unwanted history by conceding 42 points – the most they ever conceded in the Championship. Some exquisite play between Gordon D’Arcy, O’Gara, O’Driscoll, and Shane Horgan left England flat-footed and Ireland led by 20 points at half-time. Ireland came out firing in the second half too and scored another 20 points to put the English to the sword.

This was the start of a brand new era. As the very first 6 Nations got underway, a young O’Driscoll announced himself on the world rugby stage with a great performance at the Stade de France. At just 21, the outside centre scored three tries to help Ireland to their first win in the French capital since 1972. On this day, a legend was born. It was not just O’Driscoll’s stunning performance that made this game so remarkable, but it was the start of a new period of Irish rugby after a poor World Cup the year before. Alongside O’Driscoll, there were players playing that day such as O’Gara, Peter Stringer, and Simon Easterby – these four players went on to make 524 appearances for their country between them.

Ireland defended their 6 Nations crown thanks to a thumping victory over the Scots at Murrayfield. This was the second game on Super Saturday and after Wales’ thumping 61-20 win over Italy, Ireland knew they had to beat Scotland by at least 21 points if they were to stand a chance of winning the title. A try from Paul O’Connell, two tries from Sean O’Brien and one from Jared Payne alongside three conversions and three penalties from Sexton saw Ireland score 20 points in each half to pile the pressure on England, who were taking on France at Twickenham in the evening match. England needed to beat the French by 26 points to claim the title for themselves, but they fell just 6 points short of their target after a highly entertaining 55-35 win against Les Blues.