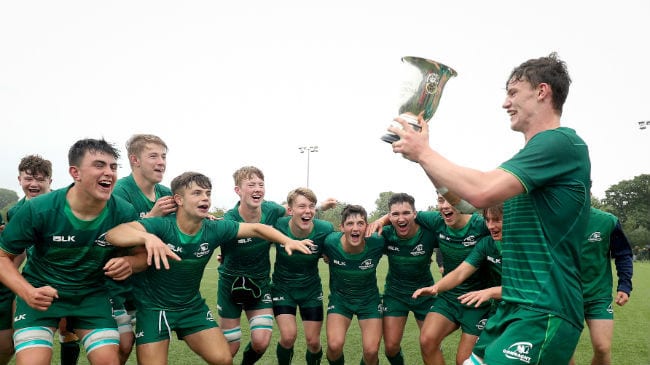 There are two Corinthians players named in the Schools squad as Diarmuid McCormack and Diarmuid Kilcommins have been called up.  And Corinthians have four more named in the club squad that will include Eoin de Buitlear, Hubert Costelloe, Cian Scanlon and Cathal Forde.

The other four players all take their place on the club side.  Ballinasloe pair Oisin McCormack and Shane Jennings will be joined by Creggs’ Aodha Hession and Galwegians’ Conor O’Shaughnessy.

The schools side will be coached by Leinster Academy Manager Peter Smyth while Fiach O’Loughlin will coach the club side, who will play a challenge match against the Italian U18 Academy.

A number of the players featured in the recent IRFU U18 Interprovincial Festival held over a ten-day period in University of Limerick in August. The festival brought together over 200 young players for a campus style festival that focused on player and coach development both on and off the pitch.