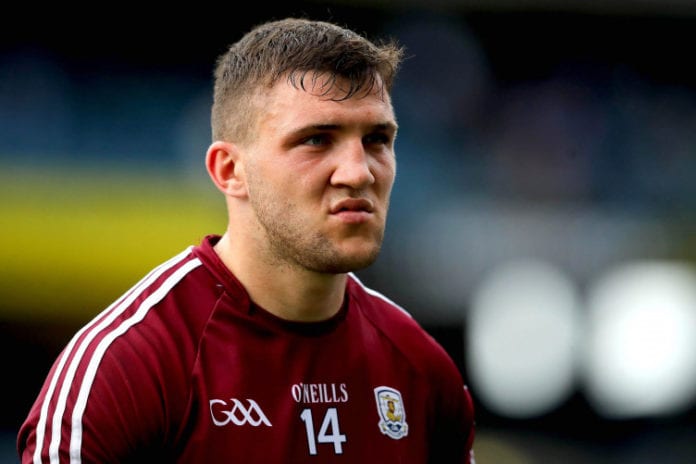 Despite scoring 1-1 including an early goal, Comer and the Tribesmen saw Jim Gavin’s four-in-a-row chasing champions overturn a deficit to lead by two at half-time before pulling clear.

Con O’Callaghan got Dublin’s green flag as Galway’s challenge fell before Shane Walsh got a late goal to keep the deficit in single digits in a 1-24 to 2-12 score line.

Damien Comer captain of the Galway Senior Football team and a teacher at Colaiste Bhaile Chlair and his students helped IWA Galway Launch their 2018 Angels Campaign on Friday. #IWAangels pic.twitter.com/E7vz1JSvX2

“Now that the dust has settled, you look back and try and assess the year,” said Comer to the gaa.ie’s John Harrington.  “And the question you ask yourself is ‘was it an improvement on last year? Was it a successful year?’

“I suppose if you look back, we retained our Connacht title and we went a step further than we had by reaching the All-Ireland semis for the first time.

“So, looking back, it was a success. But we still would have been bitterly disappointed not to have taken out Dublin or even challenge Dublin that bit more in that game.

“Looking back in that game, we were definitely in a position to challenge them a bit better. It just didn’t happen for one reason or the other.”

“There’s no denying that they’re a serious team.  And they’ve proven that over the last few years. But I just think that if you stand back and admire them, they’ll do to you what they do to most teams.

“So, you have to go and play them and attack them and I think we did that well in stages in the first half. But I think we fell short because our conversion ratio wasn’t good enough.

“But we also had chances of kickable points and didn’t taken them – myself included.

“But against any big team, you have to be taking them if you want to have any chance of coming out the right side and we didn’t.”

Galway will begin the defence of their Connacht Senior Football title when they take on London on Sunday, 5th May 2019.  Throw-in at Ruislip to be confirmed.